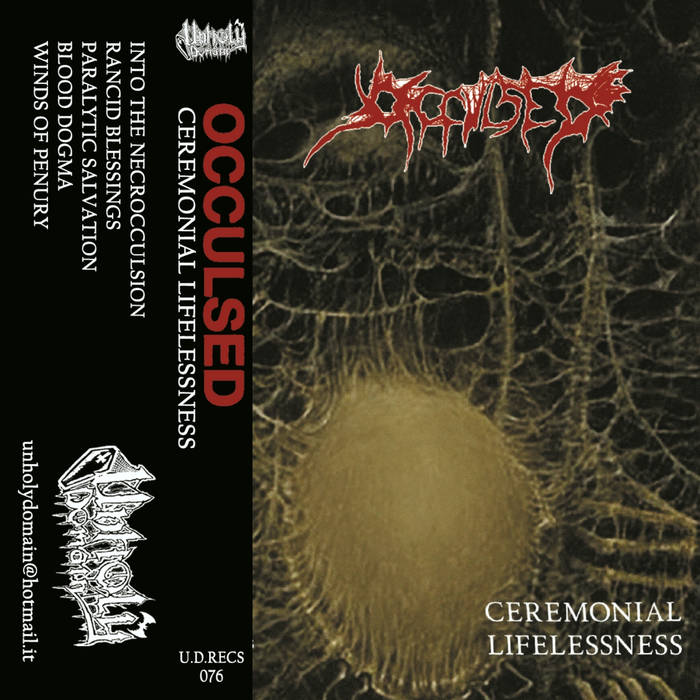 When “Ceremonial Lifelessness” pierces my skull, my squirrel brain splits itself into two halves, one half likes the dodgy Death Metal underground feeling that oozes out of my speakers, the other half notices that the band occasionally misses a beat at supersonic speeds. Which is too bad ‘cause you can clearly hear the talent boiling up when these guys slow down and deliver some really menacing atmosphere.

“Ceremonial Liflessness” counts five crushing tracks where a lot of time and passion has been put in. These guys didn’t rush themselves writing this demo. The shortest track “Blood dogma” sets off slow and alternates constantly between blasts and grooves. “Winds of Penury” is a dark and grim Death Metal track. Potential reverberates underneath the surface, but somehow it doesn’t completely shines through. Tough Mister Parker’s grunts seem to bubble up from a medieval shithouse and Mister Moran’s drumming is as dry and tight as Courteney Cox shiny forehead, they didn’t drawn me into this demo.

Maybe it’s just my tiny squirrel brain, maybe it’s my bad taste in music, but maybe dear observers, you should check this demo out yourselves. (Franki_boj)