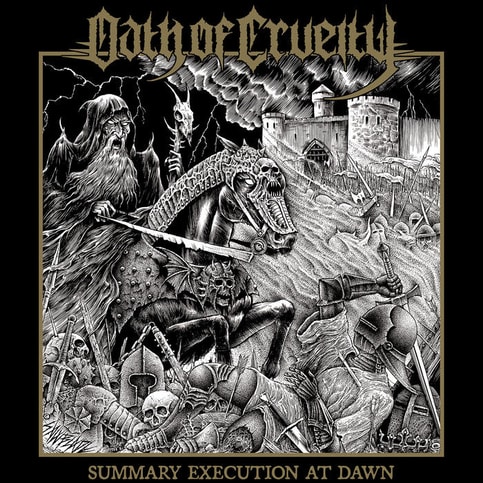 Do you ever yearn for rabid-paced, ferociously vitriolic, fiercely heavy and bestial Death/Thrash material? Well, Texas based terror generating assault Oath of Cruelty’s debut full-length is about to be unleashed upon mankind on December 9th which will satiate your longing for such acerbic Death/Thrash resonance that is similar to the sonority of Atomic Aggressor, Merciless, Protector, Terrorizer, (early) Kreator, Deathrow and many more. Bonus(!): this album also offers a cover of Merciless classic ‘Denied Birth’.

Indeed, the word ‘cruelty’ was put on the band’s name on purpose. Their cruel musicianship is very conspicuous throughout the record. What else do you expect from maniacs who has experience working with killer acts like Morbosidad, Imprecation, and Blaspherian? Abrasive riffages and blastbeats made this album further ruthless, and the raspy/whispery growls like young David Vincent of Morbid Angel or Bay Cortez of Sadistic Intent made the record more savage. Though the press release states the lyrical theme of this album is about medieval barbarity, weaponry/warfare and other stuff, you still would be able to sense a strong ancient taste of atavistic battalion demonstrating lethal combative actions amidst the tracks even before looking into the lyrics. Razor sharp guitar writings can be found here and there too, and the solos of the songs have a powerful vibe of 80’s old school classic metal. Presence of ruthless blastbeats exceeded the album to be more violent, vicious and vile.

Needless to say, this record is an assortment of honed skills of a bunch of lethal musicians which definitely takes place amongst the finest extreme metal releases of 2019. (Osmani)