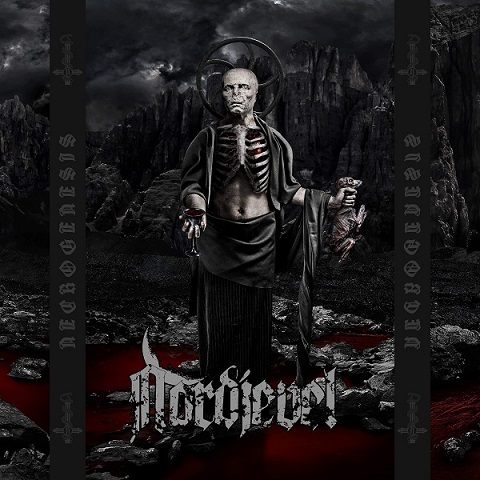 4 Years old, from Norway, already released an album and an EP, consisting from members that played in bands like Dark Funeral, 1349, Carpticon, Myrkskog, Enepsigos and many others and doing music under the banner of Black Metal, then you know that this might be something interesting. And to me it is. Nordjevel will release their new album “Necrogenesis” through Osmose Productions and wrote a dark piece of Black Metal that know their roots but looks a bit deeper into the abyss. The sound is aggressive, yet more modern in production that 90s underground releases, maybe more towards an Abyss Sound production.

The music speaks for itself. Having Dominator on drums makes things easier in terms blasting heretics away from the path they are supposed to walk. The drumwork is versatile which is not only blasting hyperfast, something that he is capable of, but also show skills for nice cymbal works and beat variations into groovier sections, always knowing how to do killer fills. The basslines are prominent, not only helping to build the low bottom carpet, but also having enough space for its own presence without distracting the general mood. The guitarwork turned out great, ranging from clean guitar passages, to powerdchord thrashing up tempo fistpower and single picked leads which throne upon a chord-carpet in a way only Black Metal can sound in characteristics. Single picked chords in slower sections are just malevolent and work excellent when used right with the changing fast picked approach of Black Metal riffing when chaotic and destructive. Some sections have a certain epicness and the right cold feeling which I love about Black Metal in general.

The band isn`t shy to incorporated other elements into their sound and still sounding homogenous and Black Metal as fuck. Some parts might sound similar to the bands they already have been involved with, but are well written and incorporated into the overall idea. The vocalwork done by Doedsadmiral are fantastic. Somewhere between Ravn, Heljarmadr and Legion…aggressive, accentuated vocalisation, some deep chanting once in a while, and simple the capability to prolong the words in a manner that sounds great and natural. Killer ride for the apocalypse to come and definitely a band I would like to see live. (DPF)