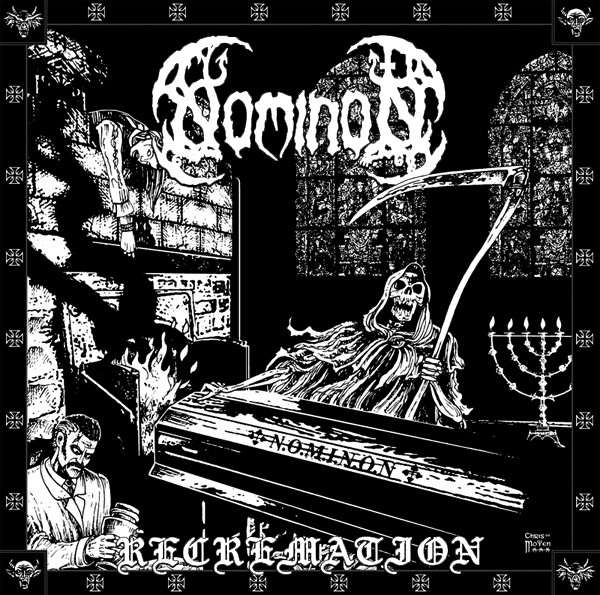 Recremation? That means that you will be set on fire twice when you are dead, to be sure you are more than dead, and won’t come back from the realm of the undead. This symbolic title has been chosen very carefully or it is a great coincidence (or another possibility, my imagination went nuts and I came up with an extraordinary idea), but the guys from Nominon came from the land of the dead, for sure! The land of ancient death metal to be precise. An ancient nation that only rarely let their victims go, and these victims are here with a vengeance and to wreck the earth and everything on its path. Nominon is definitely one of them!

Nominon is one of the best examples of the few bands still playing old school death metal, let’s say, from fifteen years ago. And purely based on their Swedish roots. Oh man, what do I love the filthy guitar sound of “Left Hand Path” (Entombed, and damn you if you didn’t know that!), “Like An Everflowing Stream” (Dismember), “You’ll Never See Heaven” (Grave), “Across The Open Sea” (Unleashed), “In The Forest Of The Dreaming Dead” (Unanimated). And what a relief is it to hear such an LP as this “Recremation”. Yes, you read that right, old school death metal on old school vinyl, it can’t get any better for me. Though the album has recently also been released on CD by some Asian label (Konqueror Records) I will always prefer a nice vinyl edition. And like it should be, we vinyl freaks gets treated with an extra bonus (+ red letters instead of grey like on the CD-edition), in the shape of a Whiplash cover “Spit On Your Grave”, from their great first “Power & Pain” album which is more than just an instant classic in metal (but this isn’t real news anyway). The rest of the album is in the right tradition of how filthy yet great death metal should sound like, with proto-grunts (really much like the earlier Entombed songs) and a thick layer of revolting guitars that sound in the right Skogsberger-tradition. With a touch of old Edge Of Sanity, you know the drill. Dig that groove baby! What is it that a true death metal freak would like to have more? I love bands like this who embrace the old-school way of doing things, releasing albums on vinyl, tapes and 7″ EPs, that’s the way it has been done for ages about one decade and a half ago. Owh, and before I forget to mention, how can’t it be more old school with a drawing of Chris Moyen as the cover art? Well? (FelixS)