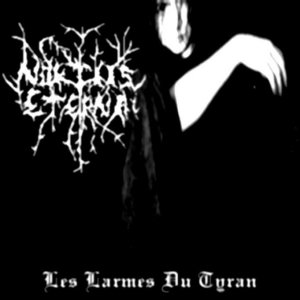 Originally released in 2005 “Les Larmes Du Tyran”, the one and only full length demo from French one man act Noktiis Eterna, has finally been given a second airing by Italy’s Slava Satan Records. With a sound that can easily be compared to early Emperor, Abigor and Summoning releases “Les Larmes Du Tyran” is a bleak and desolate affair that bases the core of its sound on semi-melodic black metal riffing, primitive (programmed) drumming and melodramatic keyboards. As you can imagine there is nothing original at all to be found here with Noktiis Erterna, instead relying on the haunting atmospheres of tracks like “Le Chant Des Neiges” and “Errance Nostalgique” to hold strong your attention for its 40-minute duration, which unfortunately just doesn’t happen.

Without any variation and a somewhat monotonous and overpowering vocal performance “Les Larmes Du Tyran” sadly just ends up becoming another mediocre black metal album from another mediocre black metal band. The somewhat fuzzy production does not help much either with the keyboards being far too high on the mix and that annoying Casio piano sound letting most of the atmosphere drizzle away into nothingness. Less pomp and more balls are needed for Noktiis Eterna to conjure up that true black metal spirit and feeling somewhat missing on this disc, because as it stands and in the words of Rik Mayall, this couldn’t raise a Nazi erection, never mind the prince of darkness. (DaveW)