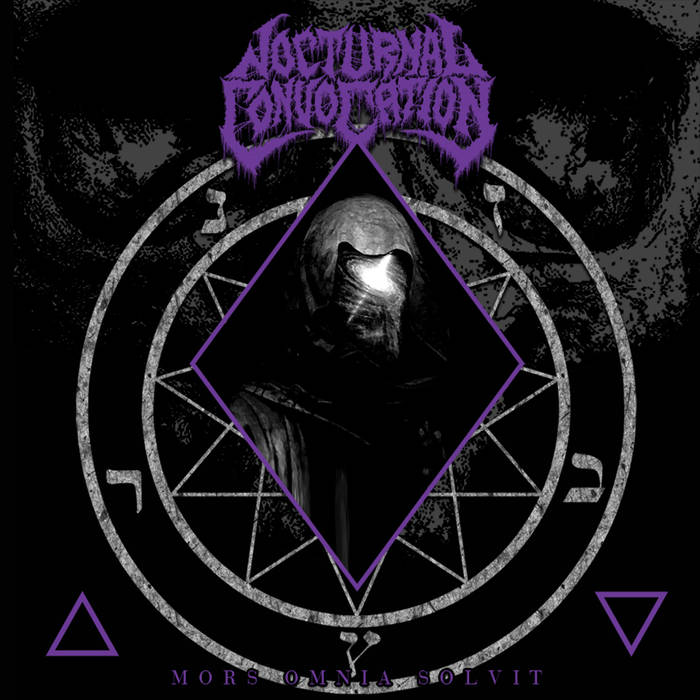 There is not a lot of information about this band available. As it turns out, that’s by design, as these self-proclaimed “Necro Doom” Italian’s choose to remain anonymous as part of their overall aesthetic. Now, this isn’t an entirely unusual marketing technique. Jupiterian, for example, goes by single letter initials, and The Funeral Orchestra are known as Priest l, ll, and lll. There are more, obviously, and this practice exists for several reasons. In Nocturnal Convocation’s case, N. (bass, vocals), B. (guitar, vocals), and O. (drums, synth) desire their music to speak for itself, seemingly going out of their way to be difficult to understand.

Depending on the circumstance, this kind of thing can be intriguing, adding an air of mystery that almost makes the music better. The thing is, with absolutely no information to go on, the music needs to do all of the talking. The music, to my ears, is a haunting, fuzzy, reverbed out mixture of NOCTU and Mourning Dawn. The vocals are deliberately ghastly, whispered snippets of attempted terror. More of a Psychedelic Funeral Doom with Gothic overtones. The trouble Nocturnal Convocation has in pulling this off is that the production value on “Mors Omina Solvit” is, quite simply, not good.

The songs aren’t bad. On the contrary, the band is quite successful at painting a foggy atmosphere on many occasions, and the pipe organ is used to excellent effect throughout. The pace is decent, and there is enough variety present to keep the listener engaged. But overall, it sounds a bit like having to listen with your hands over your ears, particularly where the drums are concerned. It seems to me, given the band’s attention to detail as far as their “mystique” goes, they’d have benefitted from putting a little more thought into how their sound might enhance the mystery. Unless the muddiness they’ve achieved was purposeful, in which case… I don’t think it works.

There is a school of thought that says “this needs to sound like a bedroom recording” in order for the art to keep custody of its authenticity. With that in mind, Nocturnal Convocation gives off a Black Metal vibe, which I’m not entirely sure was intentional. Some will no doubt very much enjoy this aspect of the record, especially during this time of year… when many are clocking in hours and hours of horror movie watch time. It is, without a doubt, a spooky listen. Perhaps that’s all these guys were trying to accomplish. (VUK)