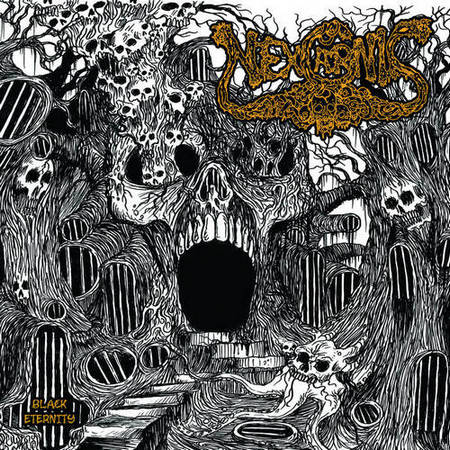 Iran may not seem to you to be the perfect kind of place that springs to mind when we talk about where great Death Metal is made, but I’m gonna say that maybe we need to throw all preconceived notions right out the fucking window right now with this band, and before anyone get’s their proverbial knickers in a knot, no I have never been there, no I’m probably never going to be lucky enough to go there and check the place out, and I have no idea just how awesome the scene may or may not be over there, I’m telling you where Nex Carnis is from, and I’m about to tell you just how fucking good they are. Let us leave it at that.

Yep, these guys are extremely solid in the delivery of their chosen genre. Formed in 2012, after releasing their demo “Death of the Flesh” at that time, they then went on to release “Obscure Visions of Dark” in 2015, and now bring us their “Black Eternity” EP right bloody now. Two tracks of what can only be described as utter Death Metal perfection, well at least to these ears anyway. The first track “Last Gleams of a Fallen Conscience” starts out with just sheer riff perfection, almost floaty in aspect as they guide you into their very own dark realm, and then these kind chaps decide to show you just how much of an arse kicking you are about to receive. Influences abound, as they often do with this kind of stuff, but the true fan does not give one shite about that, it’s the composition of the tune on display that will make or break a band, and these guys mix shit up in just the right way to keep you well and truly engaged throughout. This is Death Metal fuckers, and as fine as it gets.

Number two “The Fathomless Caverns of Oblivion” begins with a slight Doom aspect before continuing to flay several layers of skin from you, and as with the first one the pace varies according to their evil whims. You have the vocals of the very Old Ones themselves on display here, and the music that they surely must listen to as they while away their very own “Black Eternity” and toss and turn restlessly until they return to destroy us all. Again I cannot stress enough again the importance of the song structures here, sure others have done it before, and others will probably do it again, but it is the essence of fine music to me. You don’t just have a band here that repeats endless riffs and passages to get their point across, you have a band that, again to me, seems to really take their chosen craft quite fucking seriously. Hats off to Nex Carnis for that. Two tracks ain’t a huge thing, and maybe over the duration of an entire new release they could run out of puff, but by Christ if this is anything to go by, bring on another full length is the least I can say. Now I need to go back through their older material and see if this is an evolution, or if they have just always been this damn good. I suggest if this is the first time you have heard this band you do the same. Superb. (The Great Mackintosh)