Necrophobic – Dawn of the Damned 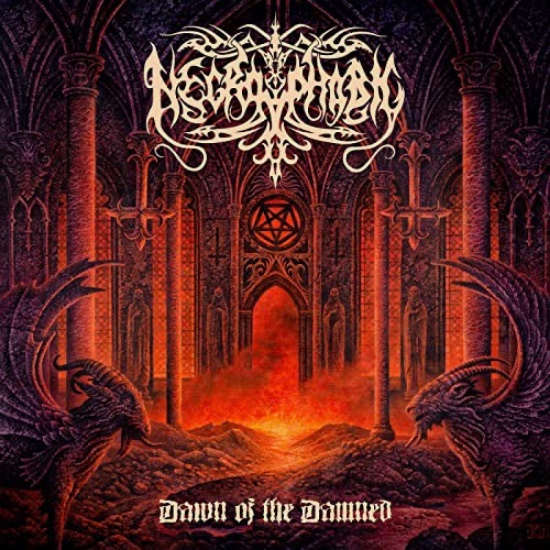 You know that a band is around for a while when they release their 9th full length, a great achievement If you ask me. Being around since 1989, after more than 3 decades doing Black/Death Metal, Necrophobic push themselves even further with their newest output “Dawn of the Damned” and probably released their most dynamic, most creative record so far.

After a well-orchestrated introduction which helps to build up the right mood and atmosphere of the record, “Darkness be my Guide” kicks in and starts with great riffing, u tempo beats and nice melodies thrown in, a good first step into this dark journey. “Mirror Black” then is one of the album’s highlights, starting with a mid-tempo riffing and a killer lead guitar, and a very beautiful riff and lead work in general, that somehow reminds of Kreator’s “Enemy of God” album, more like a Black Metal version of it, killer!

The entire range of speeds are present on this record and maybe thanks to the variations, especially through the slow and mid-tempo grooves, the album has a more hymn like character and is very bangable. The riffs, the leading melodies, all this is top notch and shows the band seeking variation and other dark corners in their blend of Black/Death Metal. The speed eruptions are still present enough. Although being a fan of furious blasting, this record manages to be interesting without the use of it and that is something for I pay respect to the guys for being able to write a record who works well without it and has got the strongest moments probably more in the mid tempo and slower tracks.

But you can’t deny the power of a track like “The Infernal Depths of Eternity ” where the up tempo skank beats are pushing things forward and make you bang your head, all topped by the incredible atmosphere and that guitar solo, before the epic hammers goes down again towards the end of the track (another highlight of the record!

After an impressive first half, the title track opens the second half and starts with clean guitar works and then suddenly changes into the distorted sounds with a strong Watain like feeling (Lawless Darkness anyone?) but always Necrophobic style (the Death Metal riffing or vibe makes a difference here as well as the highly melodic aspect of the entire track). “Shadows” is another of my favourites on this record. The screaming guitars at the beginning let yourself being ecstatic for what’s about to come and you better get yourself prepared to bang your head for a Black/Metal hymn, more Heavy Metal kind of feeling with Dissection moments and of course, amazing leadguitar work.

But all this wouldn’t work If the structure is not set right and the backbones aren’t working well together, so props to the drum and bass section as well that always plays on point what is needed without the need to show off. I also would like to give my respect to Anders who delivers killer vocals, sounding evil but understandable and giving small variations which makes the songs even more interesting and the vocals mandatory for the full audial pleasure.

“As the Fires Burn” continues where “The Infernal Depths of Eternity” left in terms of power. After a more punishing and faster track (well chosen) it’s time for a darker, entrancing track, like “The Return of a Long Lost Soul”, another epic track of the record which reminds me strong of Tribulation somehow and has it’s different dynamics with beat and riff variations that work well together and keep the song very fluent. The more Arabic like scales after the first half bring fresh air into the song and increase the atmosphere even more (Slayer, Kreator?). The guitars solos towards the end, the dance of the lost souls If you ask me (love that guitar tone man).

You think the record could end here? No way! Last chance, last time raise the swords for Satan! “Devil’s Spawn Attack” not only is another highlight but is Black/Thrash of the highest calibre, featuring none other than Schmier of Destruction, what a banger! I am sure this will cause some neckbreaking moments when played live! (Imagine a tour with Destruction and Schmier’s appearance live, crazy!) Besides killer thrash induced riffing there are some killer 90s Black Metal moments too before the speedmania goes on. Killer!

Epic melodic Black/Death is the right term here for me. Amazing record by these veterans. Not only really versatile but also constant in quality and atmosphere. Hail the Dark! Hail Necrophobic! (DPF)