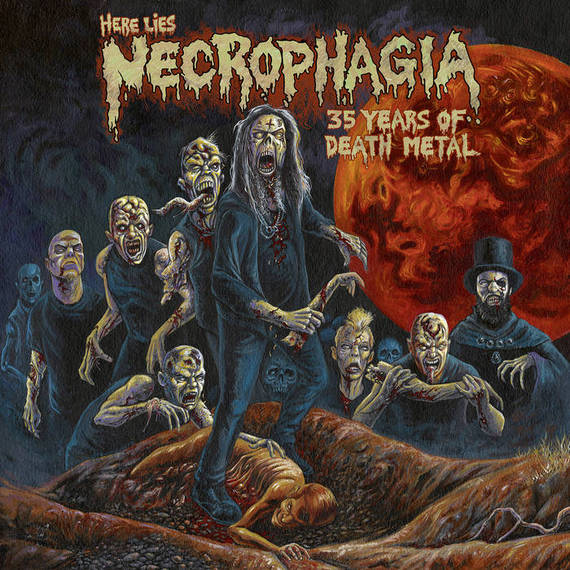 “Here Lies Necrophagia; 35 years of Death Metal” is an 18 track compilation released by Season of Mist Records celebrating the legacy of one of death metals most underground and terrifying bands, Necrophagia.

I first heard Necrophagia on their EP “Black Blood Vomitorium” in 2001, which at the time I had no idea of their legacy as one of the spawning bands of American Death Metal in the early 80’s, all I knew was the album cover was fucking sick and the music sounded much more aggressive and rawer than the In Flames, Dark Tranquillity and Opeth CD’s that were in my rotation at that time. About a year or two later I came across a copy of their 1998 album “Holocausto de la Morte” at a used CD store and was immediately drawn into the horror themed lyrics and buzzsaw guitars and again, that fucking album cover was sick. It took me a bit longer to figure out that they also had released stuff in the 80’s and early 90’s and were pioneers of the death metal sound but I eventually got there and started worshipping at the altar of Killjoy and this band of horror freak death merchants.

Everything they put out was genuine to rotten underground metal with dirty production and even dirtier neck breaking riffs, drenched in horror samples and Killjoys demonic vocal delivery. Chunky groove laden guitar riffs into face melting blasts all while hitting gut erupting lows and crypt shattering highs. “Here Lies Necrophagia; 35 years of Death Metal” gathers tracks from ‘Season of the Dead’ (1987), ‘Holocausto de la Morte’ (1998), ‘Black Blood Vomitorium’ (1999), ‘Cannibal Holocaust’ (2001), ‘The Divine Art of Torture’ (2003), ‘Harvest Ritual Vol. I’ (2005), ‘Deathtrip 69’ (2011), and ‘WhiteWorm Cathedral’ (2014). Over 60 minutes, spanning pretty much all their official releases, save a few. A slab of putrid death in memory of Killjoy (who unfortunately passed away in 2018) and one of the greatest Death Metal bands to crawl forth from the extreme metal scene. This is a needed addition to the collection of all underground death fans, sick horror freaks and headbangers.

I remember the last time I caught Necrophagia live was on their North American tour with Venom Inc. in 2016. Killjoy was suffering from an injury to his lower back and was in pain before the show started. He still took the stage and did the whole set while using a chair from the bar as support to stand up, then right after they finished, he slowly made his way to the merch table to meet fans and shoot the shit, what a fucking die hard!

Raise your devil horns and stale as piss cheap beer in the air and salute 35 years of horror drenched and blood soaked underground death metal and never forget the one and only KILLJOY, Rest in Power! (Ted Gloom)