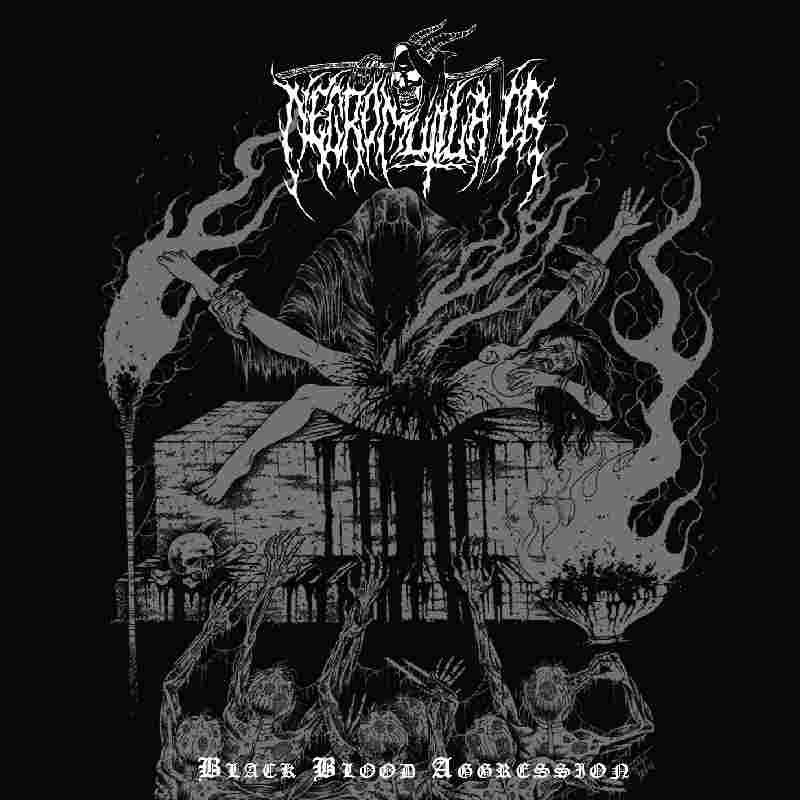 Right, turn on all the lights in the house and get some friends that you trust to come over because you really don’t want to be alone or in the dark when you listen to this album. “Black Blood Aggression” is raw, mean and fuckin nasty and each song bleeds out of the speakers like some kind a shadow demon that’s looking for its next meal. This aint no fairy tale Alice, this is the unrelenting barbarism of Black Metal with bits of Death and Thrash thrown in for good measure.

“Armoured Antichrist” starts this dark and sinister journey with the voice of a charming little girl espousing some sort of incarnation that if you don’t need to play backwards to get the meaning but don’t let her childlike voice lull you into a false sense of security cause once the music begins, it delivers the blackness and venomous atmosphere for this album perfectly.

‘Serve the Impurity” follows on with some of the most unrelenting , and in places, brutally rhythmic guitar licks and once “Nocturnal Messiah” starts, not only has Satan and his followers been raised from the dead they are pissed cause they’ve been woken.

There is no let up through this whole album as every track has horror and grotesque filled vocals, unrelenting riffage and tumultuous drumming. With names of their tracks like “Crypts of Depravation”, “Blessed in Hell Vomit” and my favourite “Cold Sperm of Sathanas” which is either Satan or a US black/Thrash metal band, I’m guessing that Necromutilator have the Lord Satan’s ear and that he actually titled some of the tracks.

Don’t let the fact that this album is Satan centric or that it’s just brutal and terror driven, the production through the album is on point and the musicianship is right up there. This album is for all those that “Hail Satan” but its also for those that appreciate the Black Metal genre in general. (Longstretch)