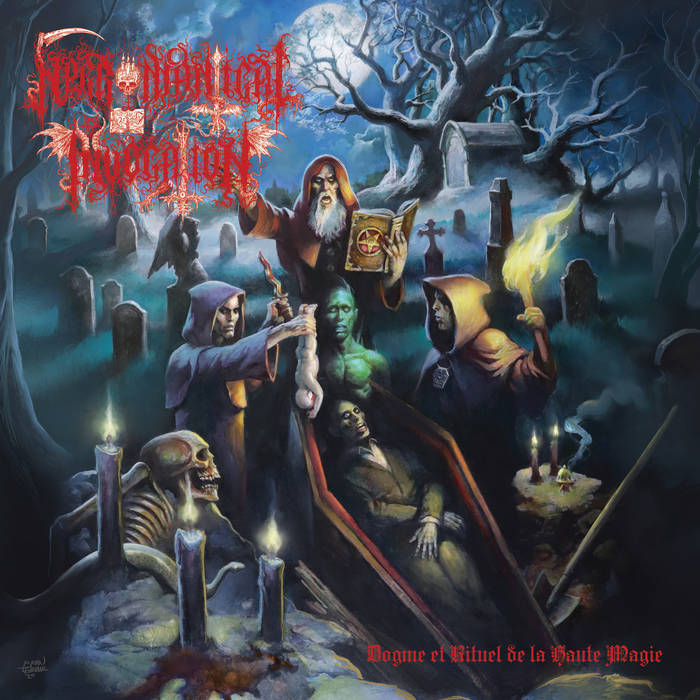 Despite the fact that Necromantical Invocation saw the light of day back in 2014, it has taken seven years for the first recordings to be released. This is possibly because Echetleos, the sole band member, is also involved with a number of other bands. These include Kawir, Caedes Cruenta, Ithaqua and Opus Magorum. Quite a busy man! Surely the great common denominator in all these bands is the famous Hellenic sound.

We can also place Necromantical Invocation in that musical corner. Right next to Necromantia to be precise. Of all the Greek Black Metal bands, Necromantia has always been the most unorthodox and has never shunned any experimentation. In that tradition, we place Necromantical Invocation as well. The bass guitar is thick on top and in many cases leads the dance, making it reminiscent of the likes of Barathrum in addition to Necromantia. Echetleos’ vocals remind me a little of Attila Csihar on the later Mayhem records in terms of rawness and dynamic creative madness. Which add to the overall impression of wild and blooming ingenuity. This demo in fact consists of two long songs, one almost clocking 11 minutes and the other even almost 16, accompanied by two shorter and (almost) instrumental tracks. Together it accounts for half an hour of creative and more than adventurous Greek Black Metal. In this half-hour, Echetleos lets his creativity run wild: guitar strumming, organs, whispered or spoken lyrics, chimes, Diamanda Galas-like Mediterranean female vocals, classical piano, ambient-like soundscapes, bass solos and even a sultry saxophone. Most of these ingredients are served separately though. Side A contains mainly Black Metal whereas on side B there is mostly musical experimentation and may not be for everyone. The Mediterranean Black Metal on side A comes in all its swirling warmth and with those typically infectious melodies and versatility. That versatility and warmth apparently makes the genre suitable enough for blustering avant-gardism and eccentric musical excursions as it gently slides into the second part of this demo.

Despite the magnificant cover-art drawing comparisons to Varathron’s ‘Walpurgisnacht’, Necromantical Invocation above all seems to be Echetleos’ outlet for untamed creative needs. As far as I am concerned, he succeeds in this with flying colours, but fans of the Greek sound, or Black Metal in general, should better not get very excited right away and carefully listen first to see if they find everything worthwhile enough. Listeners who are not afraid of an experiment and a (long) non-metal song should definitely give this a chance as they will be rewarded by a very charming and promising demo. (FelixS)