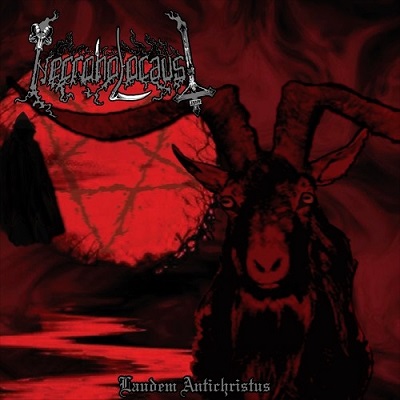 First up for NecroNovember is Necroholocaust, out of Vancouver, Canada. They recently played the inaugural Never Surrender Festival in Germany, being one of the three representatives from the great white north. After watching clips of their performance it’s safe to say the trio channeled all the evil and violence from the Canada goose and laid waste to the crowd. Two days prior to their appearance in Germany they released a limited edition, two-track EP entitled Laudem Antichristus through Iron Bonehead who also produced the festival. It’s two blistering fast songs, but still manages to prove why Necroholocaust is one of the better known names in the extreme underground.

On the first track, “Heaven Burns God Failed”, we are presented with filthy, evil, guttural vocals, but those are shunned to the wayside with the overpowering drums which for me, is not necessarily in a good way. The shrieks of torment produced from the guitars are a good match for the genre, but the yet again the drums demand full attention. The second track, “Nuclear Whore”, is more balanced production-wise, and a more decrepit atmosphere is created in the first minute before the auditory assault, I can appreciate the speed variations, and the overall sinister, chilling music dotted with guitar wailing with defiled tone and distortion.

This release is standard fare for Necroholocaust who has been desecrating the global black and death metal scenes for an impressive 15 years. If you’re a fan of any of their previous releases, this is a worthy addition to your collection. (Kaje)