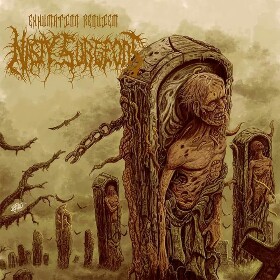 “Exhumation Requiem” is the debut record of Spain’s Nasty Surgeons, a band whose name suggests the style – Carcass-influenced death/grind. First thing that makes impression in this album after the music starts are the groove guitar parts and the melodic leads (Raul Weaver on guitars/vocals and Gonzallo Dalle on guitars) that mix really good with the primal aggression of the music. Obviously those ‘nasty surgeons’ are also very good musicians which is no wonder having in mind that they have played in bands like Internal Suffering and Mistweaver. The sound production of “Exhumation Requiem” is very good which allows you to hear all instruments and everything that is being played. My personal favourite tunes are “Human Flesh is also Food” and “The Resurrectionists” but all tracks in this record are awesome to listen to. Besides Carcass you will also hear some General Surgery,some Exhumed and some Aborted but Nasty Surgeons have a touch of their own and manage to keep things interesting. If you want to hear some first class death/grind then “Exhumation Requiem” is the album you should be looking for. (Zvetan)