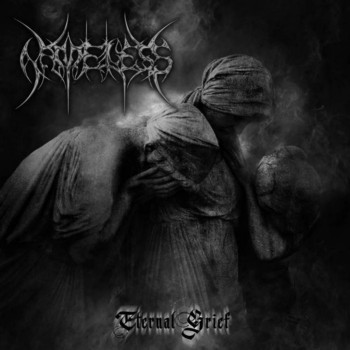 A reflective piano melody as an prelude, a funeral procession with two guitars that elegantly intertwine their harmonies, a scratchy voice that first runs between laments and then is followed by other gutturals that announce a musical turn. Here is the moment that you crash with the old school of Death Doom that appeared in the first half of the nineties, with an art accusing and painful, as the masterful “As the Flowers Withers” of Stainthorpe and Co. In this way we summarize the welcome that Nameless gives you, telling you that their proposal is the shadow, the smell of cemetery, but without neglecting the refined work of guitars. The band has a marked preference for harmonization, as Anathema will demonstrate in “Serenades”, however Nameless have more fingering, showing their creativity and good performance in the instruments.

It is precisely in the third theme, “Quiet Melancholy”, that they make it clear that the theirs is not the passivity in the guitar neck, because they raise speed and the riffs go full time, with a tendency close to melodic Black Metal. There is that the cries of laments are present again, making the combination more familiar because its own of the style. However, they never give up the opportunity to put the Doom vein and the melodic Death Metal in different sequences. When you listen to these bands you have the opportunity to really enjoy the music, because you find not only passion, but also a wide range of styles conjugated correctly. It is noted that the influences of Nameless are very varied, in different styles. The interesting thing is that there can be speed, melody, technique, but it is still grey, painful.

Another element that Nameless incorporates is the acoustic guitar, not only in clean pieces (as in “Abisinia”), but also superimposing it on songs that already carry the burden of distortion and heavy drum, as in “Dome of Doom”, an extensive song that elevates and sinks at the same time, perhaps the compendium of all that Nameless means. Great production that every fan of old Amorphis or Empyrium should not overlook. (MarioR)