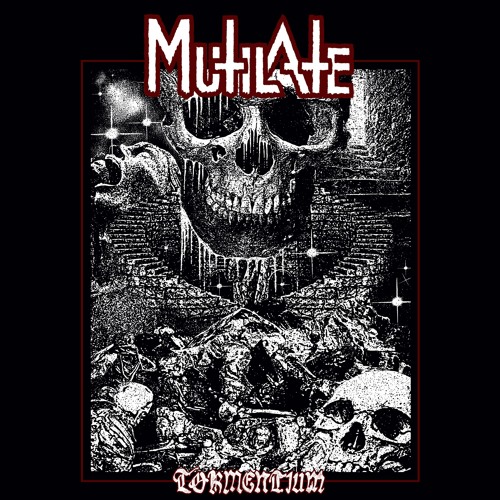 One listen to the debut album from New York based Mutilate and you’d think someone wrote down the wrong year for the release date. Surely this was recorded in 1988 and not 2018. All jokes aside, this is a very cool slab of dark death metal with subtle hints of early black metal and thrash coming through from time to time. The riffs are straight forward and very raw giving the music an almost marching like quality. It’s not overly fast but still charges forward with a lot of energy only pausing for some excellent creepy doom sections or killer whammy bar leads. When the band does kick up the tempo, it’s definitely more of a punk feel than outright blasting. “Calculated Extermination” is one of my favorite tracks on the album due to the punky nature of the track. “Engulfed in Sludge” is a very good example of the band at their best. Super catchy riffs, throaty raspy vocals and great to the point drum work. It doesn’t completely do them justice, but this does remind me of a cross between Hellhammer and Nunslaughter at times and that is defnitey not a bad thing. There is also a fairly strong Brazilian death metal feel to the music at times with similarities to Sarcafago and early Sepultura in some of the riffs as well as the chaotic nature of the songwriting. The production is very raw and that only helps Mutilate pound home their point. This is uncompromising death metal that doesn’t care about what is hip and vague right now in a world of faceless death metal bands. This is 100% true old school death metal and this album comes highly recommended. (MikeH)