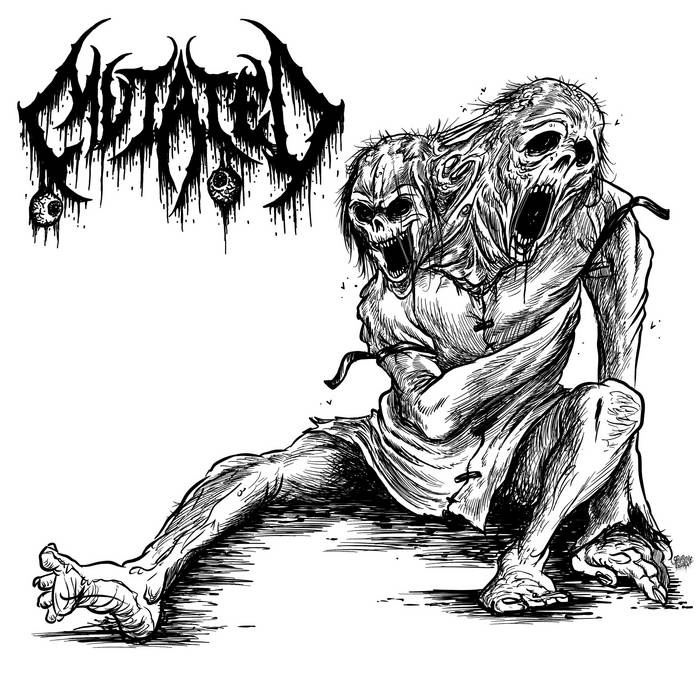 “Oh my God, Honey!! What happened to your face? Did you mutate over night?” Those were the first words my wife uttered lying next to me in bed. “No you stupid woman, that’s how any mans face would look like who has spend ten,… long, miserable years with you!” This short yet subtle conversation set the tone for the rest of the day, grim and hostile.

Grim and hostile is the overall sound on Mutated’s debut demo “Human Scourge”. The two members, mister Freire (also hyperactive at Soul Devourment) and mister Tocsain are spitting forth three decent, tightly executed and well (de)composed Death Metal tracks ,yet I do not feel any of my evil urges emerge, like pouring some chemical drain cleaner in my three year old daughters fish tank or putting some quicklime in my wife’s hair dryer, you know, the regular funny stuff that any dad would do on a daily base.

The tracks pass me by, but unfortunately I do not get agitated and scurrilous. Though that my friends is something I need to feel while listening to Death Metal. Maybe I’m getting numb or maybe you need to go and check out Mutated yourself at their bandcamp page. Cheers. (Franki_boj)

Based out of L.A., Mutated has been active [at least on IG] since 2018, finally releasing their 3 track demo titled “Human Scourge” which is recorded between duo Marco An Tocsain (g,v) and Anthony Friere (g,b,dr) who’s also active with Soul Devourment and Beyond Death.

Artwork by eccentric artist that goes by alias Gruesome Graphx, reminiscent of a 90s demo cover representing a mutated entity strapped in a straight jacket, looking as if this figure is transmogrifying to a more sinister being.

Play time is around 11 minutes, heavenly for those who are fans of OSDM groups like Gorguts or Immolation. First track “Psychopathic Thoughts” already dig the production alone, vocals come off as it was recorded in a cellar dwelling, similiar to Sepultura’s “Morbid Visions”. The solos and drumwork by Friere carry the demo out, resonating a primal, raw, unpolished tone. “Human Scourge” and “Vivid Ruins” have monotonous tempo and similar song structure similar to “Psychopathic Thoughts”.

I do wish they would invest in a possible third player to cover bass lines, would add a much needed vigor to future releases, but between these two musicians, this is a great demo to debut. (Tori Belle)