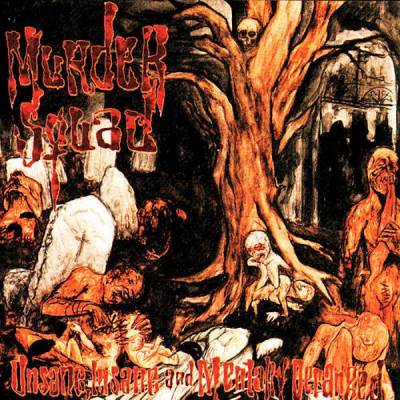 Back in ’93 members of Dismember (Matti Karki & Richard Cabeza) and Entombed (Uffe Cederlund & Peter Stjärnwind) formed Murder Squad with only one purpose: to bring back old school-death metal made by gore gods: Autopsy & Pungent Stench. At that time these guys were to busy with their main bands so Murder Squad got on a hold. Now it’s 2001 and Murder Squad is back with a bang starring a debut album called: ”Unsane, Insane and Mentally Deranged, which describe their music perfectly. While listening to ”Unsane, Insane.” you can clearly hear the influence of the above mentioned bands, still Murder Squad finds a way to put some of their own Swedish elements into the music, which makes this album kinda special. And with song-titles, such as: ”The return of the rotten”, ”Slowly burnt to death” and ”Horror Eternal”, not to mention the cover- drawing, it’s obvious that you’re dealing with an excellent piece of gore-metal. Of course there will always be people who think Murder Squad is too old-fashioned. Still for fans of true old-school death-metal like Autopsy this is a must-have album, as for myself. Murder Squad represents the true spirit of death metal, cheers fellas! (Markabre)