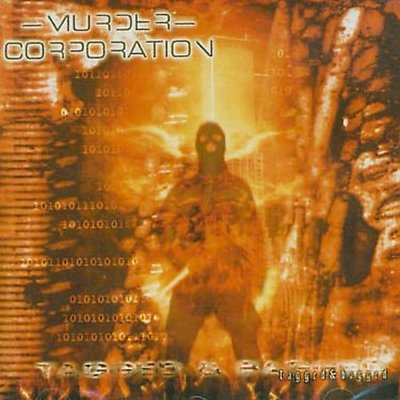 KILL KILL KILL KILL………WOW this is definetly a kick ass Death-metal album, haven’t heard stuff like this in a while.. Murder Corporation (for those fuckers out there who don’t know them by now SHAME ON YOU) started out in 1995 as a project from three original Deranged members when they wanted to raise even more hell then they already did. After tons of 7″ EP’s, CD’s, Mini-cd’s, Line-up changes and tours the band surely established them selfs as a full and worthy band over the years and can no longer be seen as a project. Their latest opus “Tagged and Bagged” contains 11 tracks of death-metal mania which can be compared to bands such as Massacre, Repulsion or (old) Entombed for instance.

A decend production is garanteed and the sickness is once again high with tracks such as “stashed in the trunk”, “guerilla 2000” or “Interstate Bloodshed”. If you like variety in your death-metal which brings back the old feeling of the swedish death-metal scene then run to the store and pick up Murder Corporation because Idon’t think any other swedish band will give you that same feeling as Murder Corporation does, it sure gets me in a killing mood. (Kasper)