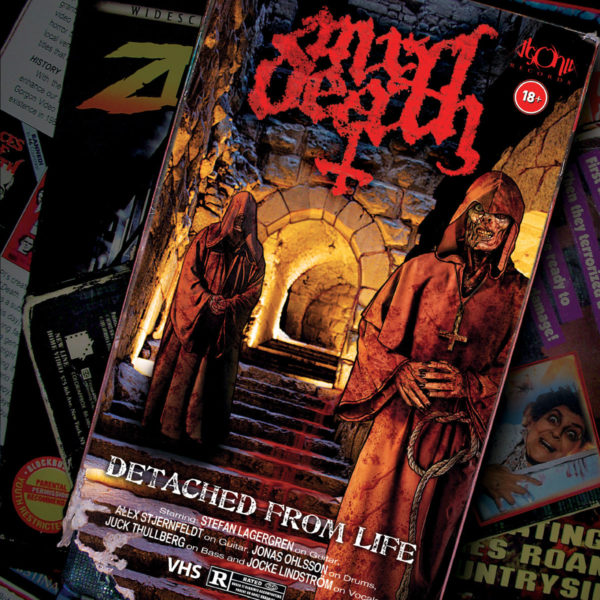 Are you guys looking for something different nowadays where metal-core ‘screamo’ self proclaimed ‘melodic’ bands are pumping all around?, if the response is affirmative let me introduce you with killer band emerged from Stockholm and baptized with a pretty unusual name Mr. Death and their debut album called “Detached from Life” brought by Polish Label Agonia Records

This great outfit, as their names states, plays straight forward old school death metal with the exquisite Swedish style that has gained so many fans around the world with coutrymates like Grave, early Entombed or Unleashed. However and even when these folks belong to that school, is possible to feel their style, their own approach, particularly in some drumming work, where they move from mid tempo speed, sudden ultra fast (not grinding) changes while the guitars keep doing pretty much the same in terms of riffs.

I like the voice, is very appropriate to the music because allows to add some twisted feeling to the final proposal but letting to enjoy the rest of the instruments and their interaction, really cool I must confess. Do not expect any keyboards, melancholic whispers or the trendy or the trendy spoken laments, ‘no way Jose’, there are only some valid samples used here and there, but besides this, the rest is pure music. The whole album has 11 tracks, none of them are above 4 minutes long, in fact there a couple of songs with less than 3 minutes, but then again, the entire thing a merciless carnival of oxidant cruelty and sickness where malevolence takes its place upon the throne of evil ‘aaagggrrttthhhh’.

Well dudes, what else can I say, good record for those searching more traditional things, if I were you, I wouldn’t wait to get a copy of this killer release, so get in touch with the Label or the band themselves, it’s really worth!!! (Master Butcher)