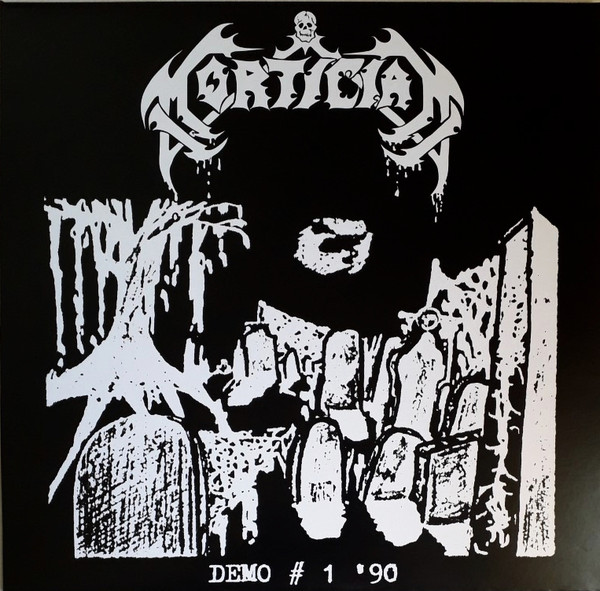 This 10” EP is the second installment in the “10 Inches Of Deathcult”-series, in which the first one was Sinister’s “Perpetual Damnation”-demo pressed onto 10 inches of wax. This second EP is nothing less than Mortician’s subtle 1990 demo.

Mortician needs no introduction and has without any doubt been one of the most important bands to help propel the Death Metal scene and their notoriously bowels-out-sound is still unparalleled. And like everything else in this world, Mortician also started somewhere. The first steps of this colossus were far from the unmatched brutality that they displayed on later albums like “Hacked Up For Barbecue” or “Chainsaw Dismemberment”. Yet, these first recorded tracks, both the demo songs as well as the rehearsal tape (on the B-side) were tape-trading favorites, already predicted a pretty brutal future.

These tracks have a more sort of organic sound opposed to the machine gun like drum sound that they would sport on later albums. That chugging, swampy sound gives the recordings that charm of the old demo tape days, where bands were still looking for world domination and eternal glory.

The demo tracks on the A-side of the vinyl are the ones that were released by the legendary Seraphic Decay label on 7” as the “Brutally Mutilated” EP, as far as I’m concerned these recordings are the same. The rehearsal on the flipside is a nice addition to this 10” EP, as these recordings are less common but gives an intimate insight in the birth of this legendary band.

Like the other releases in this series, this 10” EP is released in 300 copies (100 copies per colour variant) and comes with an inlay with old pictures. A nice haul for fans of the old school early 90’s Death Metal scene or people intrigued by musical documents of metal’s fascinating history. (FelixS)