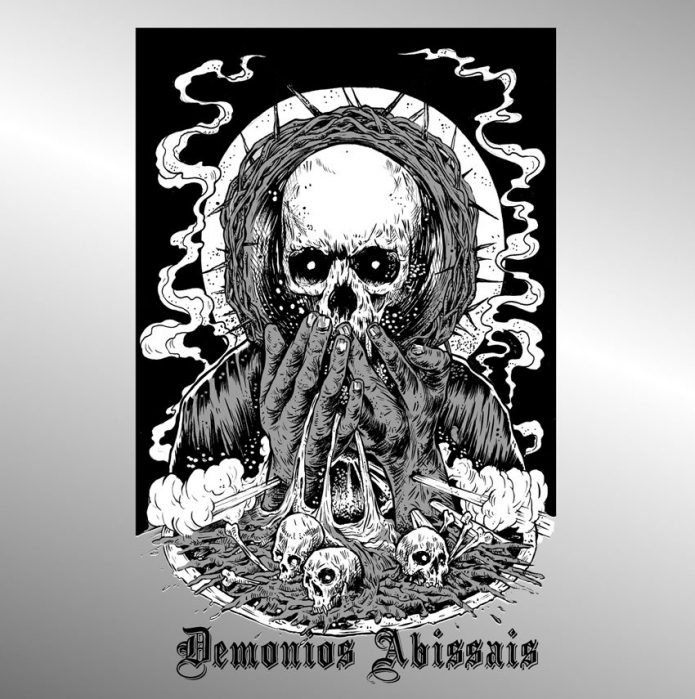 Very little information came to me about this band. They are from Barreiro, and only those a few years old know the weight that the South Bank had in the flourishing of Heavy Metal in Portugal… or Hardcore, or Punk, or Artistic / Musical Culture in general (Laranjeiro, bitches).

Ah, it has Melkor on guitars (Carnage, Culto Macabro, Di.Soul.Ved, Neoplasmah). Let us talk, then, about this trio: they arose during a co-tribute to Black Cross (classic Portuguese band that, according to “national experts”, is the first Portuguese Black Metal band, although they played a Heavy Speed somewhat…), the trio pays homage to those mentioned and to the 1st wave of Black Metal – essentially.

A slow and dense pace; very similar to Celtic Frost; very atmospheric and contemporary. It is an interesting project, I admit. Sung in Pessoa’s mother language, there are 8 songs in total (1 intro + 1 outro), two of which are bonuses (“Friday the 13th” and “Lord Satanas”, by Black Cross). The band says that they see a band as Portal as an influence, and despite not “seeing” them in its sound, I can understand the meaning they want with this “comparison”: the most atmospheric details.

The vocalizations are perfect for a slower and heavier sound, dragged almost – in moments, attention. The most inspired rips in the 90s were not ignored, no! They take me back to the 90s. There is an immense, immense, melody. Melody to which the band is adding layers, and layers. I believe that dense and slow are the two best ways to characterize the sound of Death: “Abyssal Demons” has a tremendous beginning! I only knew the name, I assume, my fault! I did not expect to come across this sound, I admit, but I was pleasantly surprised. “Pacto Malévolo”, music that “closes” the album, is another good example of what these Morte sound like, and the use of the Portuguese language helps to create a whole (real) aura around the band. (DanielP)