Morbus Grave – Awakening of the Dead / Throne of Disgust 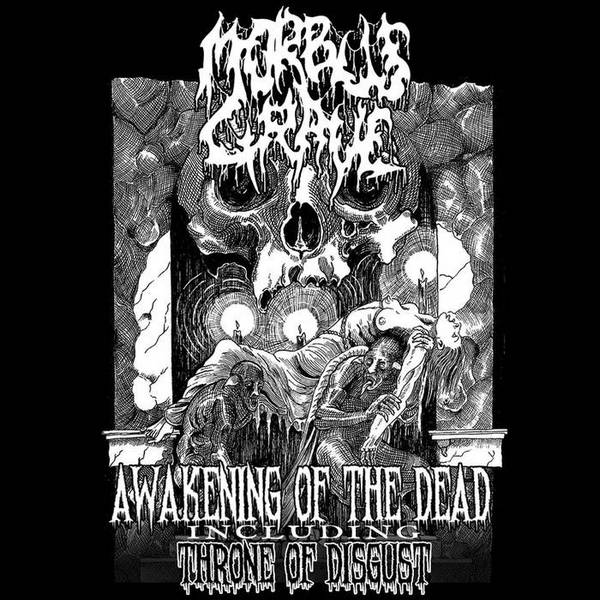 “TWISTED DEATH METAL FROM BEYOND THE GRAVE” Yes, that’s right, have a look and you will find this quote on their Facebook site, and I for one am curious about a thing or two with this statement. Are Morbus Grave actually all dead, and did they record all of this beforehand, send it to the label and just fucking suddenly die, or did they send it via Ouija board or somesuch? How do dead people actually write music? Is it any good, or just dead boring? The answers lie beneath, much like some of the recently deceased..

So what you get here is both their 2019 Demo “Awakening of the Dead” and their first ever one from 2016, “Throne of Disgust”, and that in itself is pretty damn cool. Always nice to revisit the past, and have an opportunity to compare any progression a band may have made, so that’s an instant yes from yours truly. Did I mention they are from Italy? Well now I have, so that’s dead and buried as far as things go..

We start with the 2019 release (They have another out now too “Abomination”. No we are not slack, they just keep sending in stuff from the realm of the departed, and we will get to it no doubt). Time to dig in hey? Indeed. The only way to begin is by saying two words, and they are HOLY FUCK! Intro “Cursed from Beyond” is just absolute Death Metal heaven, if that wasn’t such a ridiculous idea. An anachronism, a thing that shouldn’t be from this time frame, and yet is. Sinister to begin, and an all out fucking boot to the side of the face for the rest of it’s tenure. Reminiscent of a few, but vast enough in structure and delivery so much that you just have to say what I exclaimed before.

“Buried in Flesh” is more madness, and to not spoil anything let us just say that the gargle at the end, and the vocals in general, do so much to lift this beyond the pale, that you will either have to agree with me, or hand in your Old School Death Metal card, and go fuck right off as far away as possible from my sight. Sure, the old saying goes, the wheel has not been re-invented here, but you most certainly are going to be crushed by these ones. Roll onto “Awakening of the Dead” for more nastiness, with a nice little side of bounce, and you will also enjoy some lovely Death grunts, and they always make me happy. Then before you know it, we are magically transported back to the days of 2016, when the world wasn’t about to end, and apparentley the dead roamed freely on the streets, and no one gave a single fuck.

Opening with, surprisingly, the aptly named “Intro”, you then get “Throne of Disgust” to sit and ponder upon. And what a throne it is. Worthy of any mighty king, except maybe the king of kings, because he is just made up bulllshit. Where was I, oh that’s right, yep, this is magnificent. “Descent Into Dark Abyss” has more swagger than you can poke a stick at, and should have you almost in rapture. You really can’t ask much more from a band of the Death Metal variety. “Mutilation” is again, the stuff of legends, and again, I’m not going to mention who or what they may sound like, because that will just spoil it, but it is indeed angelic to the ears, and very worthy of your time. “Drowning By Nightmares” closes this one out, and closes it well. These guys have a very promising future, one I will be following with interest for sure. In such a short space of time, to get this good, you are doing things the right way. I’m even more impressed that they either recorded this before dying, or sent it via some weird arsed method that I will never know of. Can I choose between the two on here, yes, and I’d go for both. See, it’s that easy. (The Great Mackintosh)