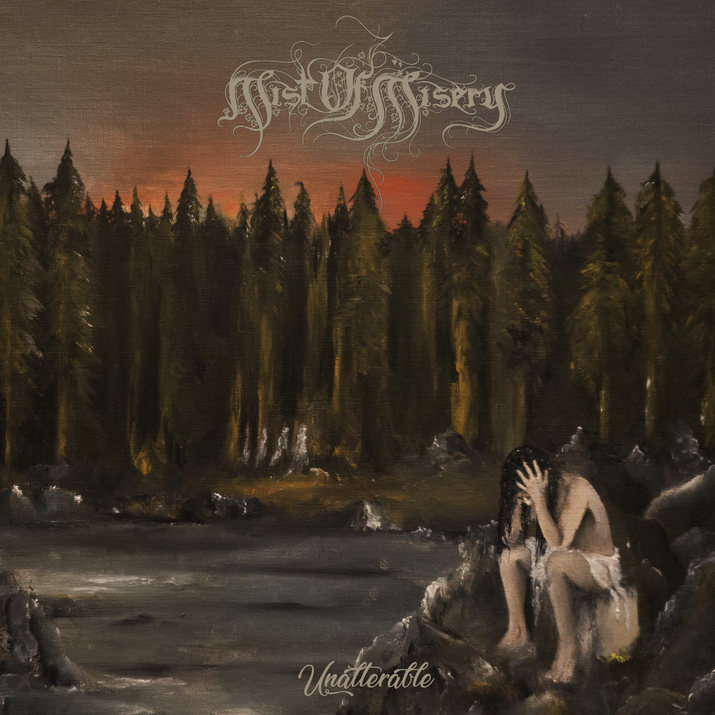 Returning from the cold, icy realm of Sweden, Mist Of Misery return with their third full length album “Unalterable”, that follows on after their “Absence” album and bridged between their previous EP’s “Shackles of Life” and “Fields of Isolation”, giving us a long epic/saga of someone’s nightmare, depressing, morbid tale. With an opening of soft angelic beautiful female (choir) vocals, that opens a nightmare-ish vortex of symphonic/classical parts of Dimmu Borgir & harsh vocal shrieks of Shining, and beautifully mixed with old-school Norwegian Black Metal of atmospheric/repetitive riffs, like of Bruzum & Mayhem, mid-paced to blast-beat drumming is kept…

Within all this brutally, the band also embracing the cold, enchanted, raw, violin/keyboards death-wish instrumental Hypnotic inserts making the music more morbid, atmospheric – yet – beautiful in its own way. It should also be noted that the tracks are much longer than their previous album “Absence”.

The artwork is also similar to Celtic Frost’s album “Into The Pandemonium”, within the artwork, you see someone with their head in their hands, is this, the person of their own interpretation of their nightmare-ish prison or hell?

They are two tracks that standouts the most, is the cover version of “Stormblåst” (by Dimmu Borgir), the intro of the song, is in-key with the original opening, even the blast-beats, atmospheric riffing is so perfect (you wouldn’t think this was a cover song), It’s the vocals that stand out… without trying too hard, the lyrical parts just roar out of the
singer vocal cords, giving it a darker, dynamic epic vibe. Then moving onto the second track that stands out, but this also the last track from the fourteen tracks on the album, is the “Eternal Beravment” outro. This track is beautiful, sorrow, the despair of fewer than four minutes long of piano instrumental and the sound of rain in the background. Making the end of the saga of the person’s nightmare-ish hell or just a new chapter to their nightmare?

For all different types of Black Metal styles, that I’ve listened too, this band’s music (symphonic/classical parts), stands out the most for me. I’ve just this to say that if Beethoven was a Black Metal artist, Mist of Misery’s work/music would be is “Symphony No. 9” sage. (KristianM)