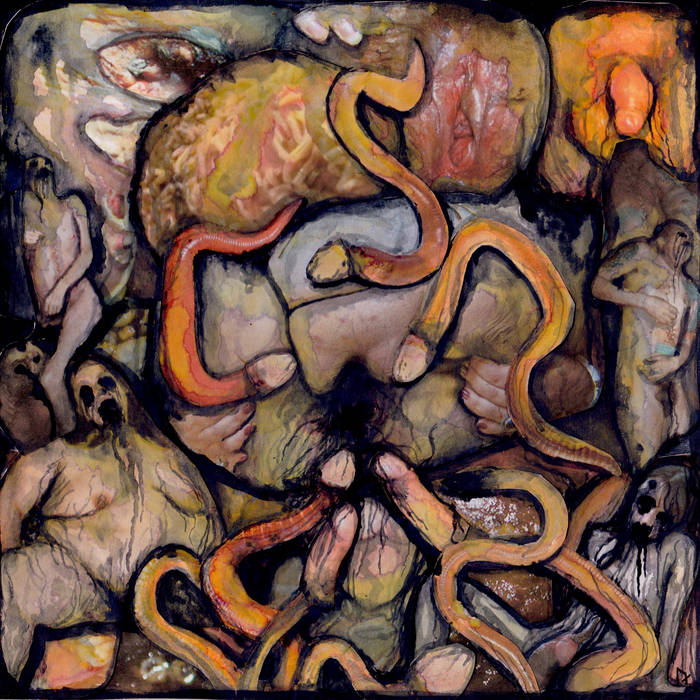 What’s the first thing that pops to your mind when someone says they found an album which contains no less than 100 songs? And when they tell you, only a couple of those are longer than a minute? Add the expressive title of the album aaaannd… first idea to pop into my mind would have been ‘this is a power violence album’ and since I’m not a huge power violence fan, I would have turned away and also most probably run somewhere to find something more suitable for my ears.

But, this is clearly a Miscarriage record, since you can notice the blacked out parts on the album cover which has been posted on the internet. The same thing happened to their debut full length ‘Imminent Horror’ released in 2019, even though the music on that album was much different back then. (For ones of you who might be interested, the uncensored version of the cover art has already been posted on the bands Bandcamp page, together with a song which is not contained on the album).

Miscarriage is a duo containing vocalist and guitarist Jon Paxton from USA and drummer Ulf Nylin from Sweden. The guys previously worked together in brutal Death Metal / Goregrind band Ovaryrot where Paxton handled the vocal duties between 2012 in 2017. They allegedly formed Miscarriage in 2016, released three EPs, which have been later compiled to “Homicidal Mania” compilation in 2018, and a full length. Miscarriage was started out as a Goregrind band (if their name didn’t already give it away), which turned into Death Metal with occasional Sludge elements on “Imminent Horror”, so people acquainted with the band probably weren’t certain about what would happen with “Fucking Disgusting”. Even though there was nothing wrong with “Imminent Horror”, some of us were psyched to hear the duo will be going back to their roots with this one.

Their particularly nasty take on Goregrind doesn’t waste any time in attacking the listener with sheer brutality of absolutely insane drumming and barking vocals and the only breathers on this massive work for any grind band is when there’s a part of the second pause between songs. In certain cases they are really close to crossing over to gore-noise, but they still manage to stay comprehensible. Untrained ears will start bleeding immediately after putting this one on and even the more trained ears might have difficulty getting through the whole album in one sitting (because seriously, listening to just over an hour of this absolute madness does not leave the listener without certain side effects). Imagine combining fever dreams, taking acid and standing on the verge of hell listening to souls being tortured. Sounds good? (Black Mary)