Mezzrow – Then Came The Killing [Re-Release] 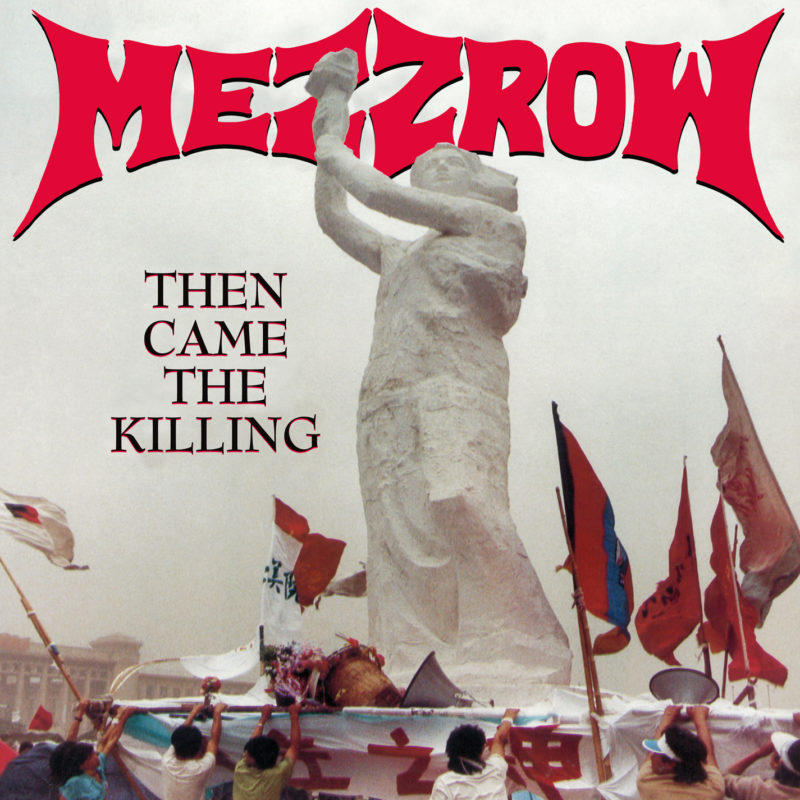 When it comes to Thrash Metal there is always the American ‘Big Four’ (Metallica, Slayer, Anthrax and Megadeth) or ‘the three Germans’ (Kreator, Sodom and Destruction), but if you’re reading this it is needless to say that there were way more great bands from all over the world. As always, it pays to look a little further than the obvious choices or commercial successful. Sweden for example is not exactly the first country you think of when it comes to Thrash Metal, yet the Swedish scene has produced a handful of nice and interesting bands to offer. The most notable would be Hexenhaus, which came out of the breakup of Maninnya Blade (that played a style that comes closest to Speed Metal), Kazjurol (which came out of the vibrant Swedish punk scene in the 80’s) or the somewhat more technical Midas Touch. However, all these bands have two things in common: one being the fact that none of them ever had a major breakthrough or global impact.

The same goes for Mezzrow. A band that had its formative years during the mid-80’s and had the bad luck of not living in San Francisco, as the Bay Area influences are all over the place. They recorded two two tapes before getting signed to Active Records, the same label that picked up Hexenhaus about two years before. The only full-length record that Mezzrow ever came up with, ‘Then Came The Killing’, saw the light of day in 1990.

What we have here is the Hammerheart Records-released reissue of that album. This reissue is available as a double CD with the band’s three demos on the second disc. The album was also rereleased on vinyl and along with it a separate double LP with all three demos. You can easily see this as a piece of homage to an (almost) forgotten band.

Diving into ‘Then Came The Killing’ first. As said, it breathes Bay Area Thrash Metal, it sounds a lot like Exodus with very similar mosh parts but also has similarities with early Death Angel (though being less melodic) or Heathen (but less technical). Although the influences are obvious, it is also clear that Mezzrow don’t quite have equal qualities of their American examples. But that’s the case with many of such bands in the late-80s Thrash Metal scene, and that’s where you have to place Mezzrow. Bands like Meliah Rage (also recently re-released by Hammerheart Records), Xentrix, Exumer or maybe even Toxik are Mezzrow’s comrades in the same historical context: not exactly second rate but clearly never made it to the big audiences either and thus especially stuff for genre-aficionados.

Then we have the three demos. The first two are pre-album and give a nice idea of how the band developed. From both the first and second demo, all but one of the songs ended up on the album, so here we do hear them in their embryonic form. Especially ‘Prevention Necessary’ from the first demo (‘Frozen Soul’) sounds very good, and actually, this song would not have been much out of place on ‘Fabulous Disaster’, the 1989 Exodus album. After the band lost their contract with Active Records, they recorded another demo, simply named ‘Demo 1991’, on which we hear a Mezzrow that continues the musical path of ‘Then Came The Killing’ but adding some melodic leads, like on the song ‘Blind Belief’. The demo didn’t really lead to anything and the band slowly started to perish in the violence of the new environment in Sweden: Death Metal.

Anyone into late-80’s straightforward, chugging, angular Thrash Metal with non-melodic vocals can indulge themselves with this reissue. It may not be the best band in the world and it may not be to wonderous that the band is somewhat forgotten, but this reissue is fully justified. Not only because that one other thing that Swedish Thrash Metal bands have in common: their influence on the Swedish Death Metal scene and therefore prove to have big musical historical value, but also and mainly just because this is a good portion of nice uncomplicated Thrash Metal. And we all love that, don’t we?