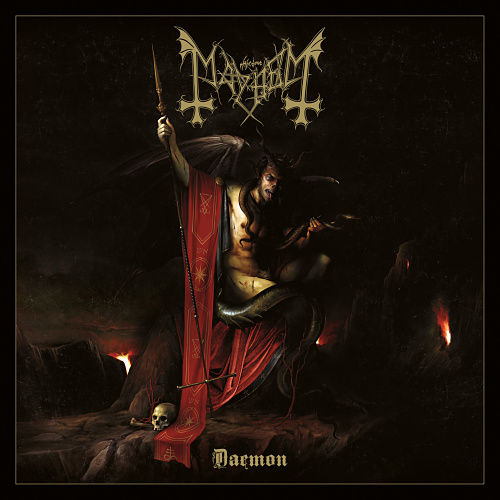 Hail, Hail Satan! There is a brand new Mayhem album for us all to bathe and revel in it’s glorious and wonderful black art wonderment. Being that you are on this site, reading this review, most likely know a good deal about metal and, also, that you most likely already know, or kind of know, the whole story behind this band as it sits in infamy, I will spare you all from the whole biography part of a review that happens. Yet, you can not ignore the press that has come out while the band has been out doing interviews for this new release. Well, really just the fact that the sole remaining original member of Mayhem, Necrobutcher, came out and said that he was planning on murdering Euronymous himself but Count Grishnackh, aka Varg Vikernes beat him to it in the end. Of course, there is more to it than that but I suggest you look into it yourself if you are interested, for we are here to discuss this great new album here “Daemon.”

With “Daemon,” Mayhem have pushed aside the outlandish, disjointed stylings of their last two albums, “Ordo ad Chao” and “Esoteric Warfare,” for a more traditional, original version of themselves. This is along the lines of what you will probably see/be seeing out of most reviews that will be/are being put out about “Daemon.” Although, I may feel that this is somewhat correct, I can not really stand behind it as an official statement about what is going on within this beast of an album here. From what I hear, in my, what I would call in my humble opinion, familiar with Mayhem ears, is an evolution from what was being introduced to us on “Esoteric Warfare” and have combined that with what we would consider a more traditional, original, “De Mysteriis Dom Sathanas” sound for Mayhem. There is an obvious turn back to what they once were but they have interlaced it with ideas that have formed through their latter endeavors. A true amalgamation of what Mayhem truly is as a band in the year 2019. And that mixture is pure blackened goodness, the likes only Mayhem can serve up.

I would also like to add that the performances put forth on this album are some the most precise, outstanding and possibly career defining in the band’s lifetime. Sure, the album may not be in instant classic or even compare in your eyes but Mayhem quite possibly sound the best, as a complete band, as they ever have. They are locked in beyond compare and it shows as a true strength of this album. The drums from the almighty Hellhammer never fail, are always tight, precise and thunderous as all hell. The guitars handles by the duo of Teloch and Ghul buzz, slice, dice, mesmerize and murder with a cacophony of great riffs and furious walls of sound. Necrobutcher’s bass pummels and plods it’s way into your soul like no other. And Attila Csihar has presented us with his best performance to date, in my opinion, on recorded material. His vocals are as vast and vital as always yet he has stepped his game up to a level unseen and I already thought he was the best Black Metal vocalist of all time but now, now I am certain. He wears that twisted crown.

Now, as I said, “Daemon” may not be on the level of an instant classic but it is really, really damn good. And you never know, years from now we may look back and find it may be considered a true Black Metal classic in the end. It is the most complete (as in unifying all the sounds and styles of the bands career), familiar (it will satisfy all the trve warriors who complained and left with “Ordo ad Chao”) and unique (takes all that I said above, blends it together and makes something newish) album they have released since the glorious debut I listed earlier, “De Mysteriis Dom Sathanas.” Seriously, “Daemon” is an all around great album through and through but don’t just take my word on it, check it out, it may be best thing you do for you.  (Ben Schultz)