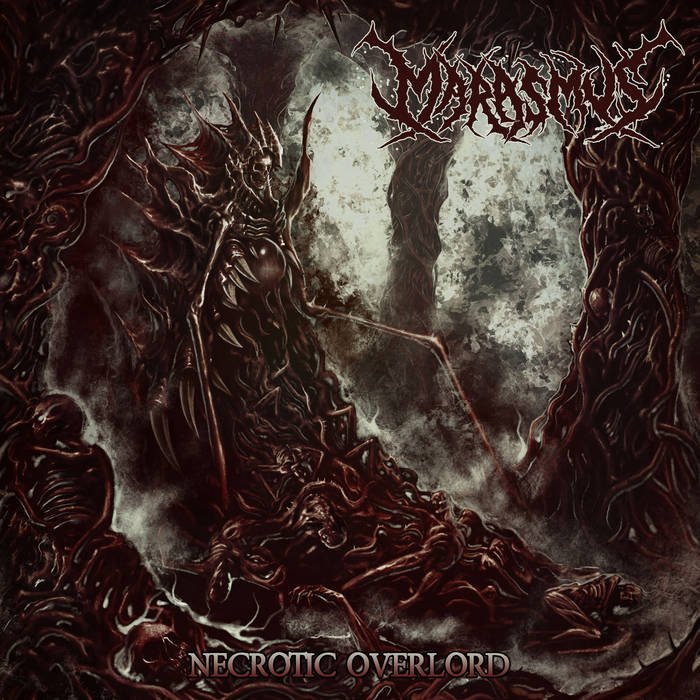 Today we have got some Brutal/Tech Death metal from Marasmus. Out of Kansas City, Marasmus has been releasing music since 2009. I am a general fan of Brutal Death Metal, but I find that sometimes the technical side can add too much complexity and usually leads to a lighter sound.

That is not the case with this release. Marasmus finds themselves in very balanced pocket within the genre. They have the crushing, down-tuned riffs, the super technical and tight guitar licks, and blast beats beating you silly; but they can still utilize some progressive songwriting and some more chill parts. With that being said, they bring forth that mixture without seeming garish or gaudy. I do not mind bands that can progress from lighter parts to incredibly heavier sections, but just find that many of them end up failing at both the chill and the brutal parts. Marasmus has the rare ability, for a brutal death metal band, to use progression in a way that adds to the brutality rather than taking away from it.

The drumming shines through for me on this album. I have so much respect for Brutal/Tech Death Metal drummers, as they have a very difficult job in driving and keeping tempo, with such veracity and precision to boot. There is zero room for mistakes and the drummer on this recording is bringing the listening exactly what they are looking for when it comes to Brutal Death Metal. As mentioned before, the guitar parts can be quite progressive, going from light and melodic to crazy technical to heavy as piss all in the same song. I am not a proficient guitar player or am knowledgeable about the terms of guitar techniques, but there is an obviously vast amount of techniques being used by the guitar players. Vocals are pretty standard for the genre, but are still done very well.

One of the minor issues I have with this album is with the production (seems to always be my problem with modern metal). The sound, in my opinion, could a bit more full. The bass is a little lost in the mix, and the sound could use a heavier and more distorted tone. I fully realize that is not particularly on par with the Brutal Death Metal formula, but I think using more bass and rawness in the production is something a lot of modern metal bands should be using. This will add even more heaviness to the overall sound, but is a very minor problem and is purely my own opinion.

This band is for fans of Dying Fetus, Aborted, Origin, Decrepit Birth, and many more. I would highly recommend this album and band to any Brutal Death Metal fans. (Fetid Priest of Pestilence)