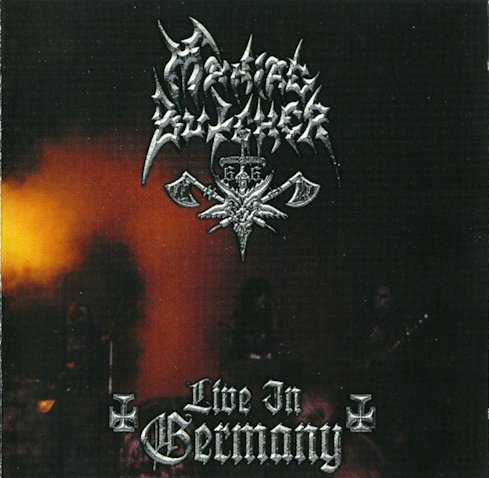 This release contains some legendary live recordings of an equally legendary band. It’s already for some years now that Maniac Butcher has quit the scene and stopped its activities but their name is still dwelling within the underground, probably now even more than when they were still active. The band started somewhere in 1992 and vomited since then nothing but black metal in its purest form: total fucking hatred !!! Their albums were raw, harsh, necro and morbid (one of their favorite statements was: “Keyboards? It is good for disco-music !! We remember old times when it was a shame to use keyboards in Metal !! And female vocals ? We use mouths of girls for totally different activities !!”) most of them released by their own infamous label and distro, Pussy God Records. The blasphemic and heavily spiked Czechs always headed for the extreme, even in their side projects Dark Storm and Nhaavah (old Czech for death), crushing or even incinerating every weak and trendy gothic fag ‘black metal’ band. Dark Storm played in the vein of Maniac Butcher while Nhaavah performed really some disturbing black metal terror, a bit like the Dutch band Botulistum. The Greek label Unisound Records has recently re-released most stuff of these bands on CD.

The “Live in Germany” album contains eight tracks from four different gigs that are, in one or the other way, holding some interesting facts. Two recordings have Akhenaten, from the deceased American band Judas Iscariot, as guest on bass while the last recording was done in 1997 at the cursed Chicago Club in Annaberg. Yes indeed, the notorious German club that burned down of which for example Nargaroth also used pictures in their booklet of the ‘Black Metal ist Krieg’ album. One could say that these recordings are almost a historical document …
I was actually quite surprised with the very decent sound quality of the live-tracks; it comes quite close to their album sound. However, just to set things straight for the unknowing bastards, Maniac Butcher is like an oxidized knife carving through your flesh, so don’t expect a friendly, polished sound. This is how real black metal should sound: raw, chaotic, sick and hellish noise, spreading total death and if you can’t handle it, you just can fuck off and die!

The album is released as CD and limited LP by From Beyond Productions and is specially dedicated to the German fans but I would like to add that it is an interesting document for anyone who appreciates Maniac Butcher or raw black metal in general. Be also on the lookout for some Maniac Butcher vinyl re-releases by Sombre Records (‘Invaze’ is for example a fucking brilliant and blood freezing album). The 2 leading members of Maniac Butcher, Barbarud and Blasphemer, raised in the mean time a new band, ‘Iron Fist’, playing heavy metal in the vein of Metalucifer. All hail to Maniac Butcher!!! (Jerre)