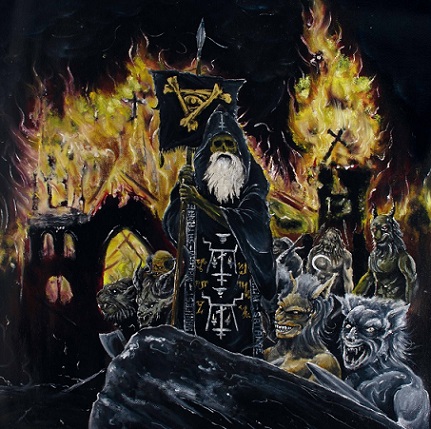 Malum from Finland are a brutal Black Metal band and not entirely unknown in the current Black Metal scene. This is their third opus, “Legion”, released through Purity Through Fire.

Influences from a band such as Azaghal, a Satanic Warmaster or a Horna are notably present in their sound. It’s mostly full throttle with possessed vocals, until it slows down to a mid-paced infernal monster and adds extra texture and colour to the music. In comparison to their previous two albums Malum have upped the level once more. Incorporating subtle synths to their brand of Black Metal and using occasionally dubbed vocals and hymnal effects are just a few of the details that make this album quite irresistible and very impressive to listen to.

By no means is “Legion” a polished album. Rest assured – it’s still as gritty and abrasive as Black Metal can be. The tracks on this 38 minute long album are immensely dynamic and full of satanic energy. Are Malum yet another band of good yet typical Finnish Black Metal? Let’s say that “Legion” is way above the typical Finnish Black Metal sound. The song-writing is flawless, the performance impeccable and the production of high quality.

Malum have worked their way up to new heights. Fans of pure, cold, harsh, yet semi-melodic Black Metal with the mandatory melancholic, gloomy and dark brooding Luciferian atmosphere, need not to hesitate. Those who have their previous albums will know exactly what I mean.