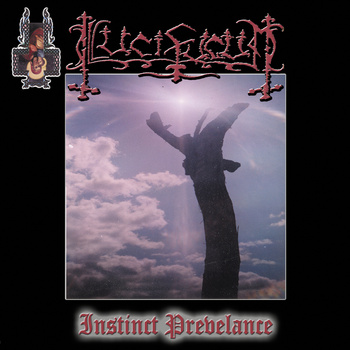 The debut release of this Ukraine’s formation has a very nice piece of music to offer; atmospheric black-metal. It consists of two elder demo’s compiled named “Path of Wolf” and “Fire of Hatred for Sky”. This second part has a more grim production thus a more raw – and personally a better more evil – sound. Also the line-up is slightly different compared to the first part but this doesn’t have any effect on the overall sound. The overall perspective on production is good, especially for two demo’s. Lucifugum’s music resembles their fellow countrymen ‘Nokturnal Mortem’. Coincidence? Not likely, considering the fact of finding two of their members (Varggoth & Saturious) in Lucifugum. The numbers are – as in ‘Nokturnal Mortem’ – dominated by the amount of keyboard riffs, but not disturbing for this element adds an eerie feeling to the environment and that’s just what the overall perspective is all about; atmosphere black-metal. Combined with the foul throat that Varggoth bears primitive black is being born. A great example of this (also the two best numbers on the album) are the numbers “Wolves” and “Uм, Mydpвıм u жuєвıм”, where they use different drumbeats (electronic) and rhythms. Number ten is one of the most dullest outro’s I’ve ever heard. Guess they run out of ideas and needed the tune to fill up the space.

Of course, this formulae of creating songs (besides the last one) is unfortunately reinvented. Therefore it is not a original album thus another black metal band with keyboard. So don’t expect wicked guitar play or a raging drummer with elastic muscles in his calves (for they use a drum computer) as one would find in Marduk, Dark Funeral, Mayhem etc. Just your plain underground atmospheric black-metal act as we know it. (ManuelB)