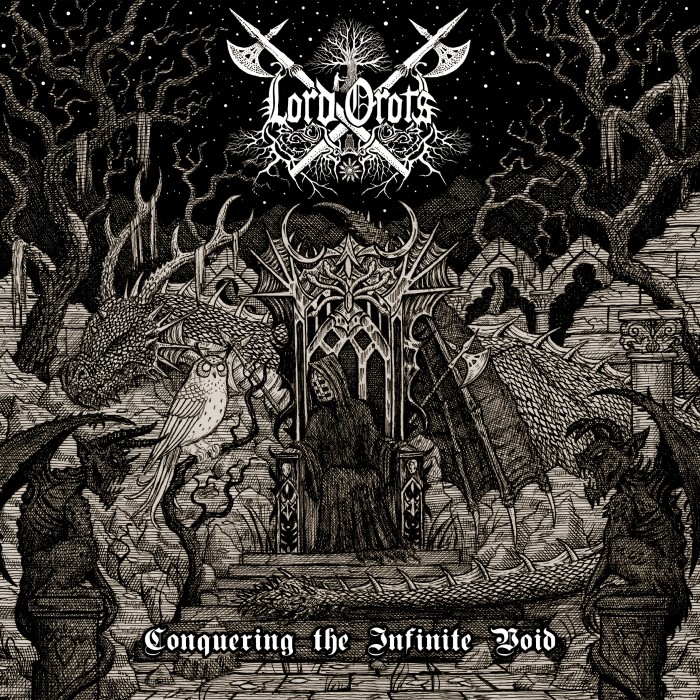 I must confess to not knowing a great deal about Dungeon Synth. I have been aware of the genre for some time, but other than a few scattered releases that I probably only listened to half of, I know next to nothing about it. If someone asked, I’d probably say Dungeon Synth is like Medieval Atari music. Obviously, that’s an oversimplification, and a description that may upset enthusiasts. However, I’m simply trying to illustrate how clueless I would be if I chose to critique Lord Orots upcoming release on the premise of it being merely a Dungeon Synth album. And as long as we’re telling the truth here, if that’s all it was, I’d probably have turned it off half-way through like the rest of the Dungeon Synth I’ve attempted to listen to.

“Conquering the Infinite Void” is, it seems to me, a unique artistic expression of a dark fantasy landscape. The synthesizers Lord Orots uses do have a nostalgic Atari-aged vibe to them, but he is not content leaving the storytelling to the keyboards or a smattering of stock sound effects.

The opening track, “A Timeless Kingdom” sets the scene in a dark nighttime forest during a light thunderstorm. The computerized organ thickens the tension but seeping in slowly is the fog of reverb-drenched Black Metal guitar. It seems an enchanted land. A place rich with history, far from home yet close enough to smell the memories of a youth cut short by tragedy. The instruments weave a sad melody, as the rain drips from the canopy of trees.

Each of the four songs on “Conquering the Infinite Void” has a similar epic fantasy aesthetic, but Lord Orots does not allow them to be boxed in by genre. “The Black Abyss” features blood curdling screams over layered atmospheric guitar work. “Nefaxion’s Awakening” is a slow-building wall of sound that ends with more excellent droning guitar and weaves into “The Lord Rises From His Throne” in an almost cinematic fashion.

The kind of cinema we’re talking about, of course, is something like “The Neverending Story” or “The Dark Crystal”, but that’s all part of the album’s charm. Those are classic movies, and Lord Orots provides a classic sound… with a twist. It’s almost as if the man traveled back in time and introduced Wolfgang Petersen and Jim Henson to Bathory and Mortiis. Think about that for a second. I’m not even going to try to pretend that isn’t a wickedly enjoyable notion.

I really enjoyed listening this album. I wouldn’t consider it anything but an expression of wholehearted creativity. So, Lord Orots, I say unto thee… nicely done, my liege. (VUK)