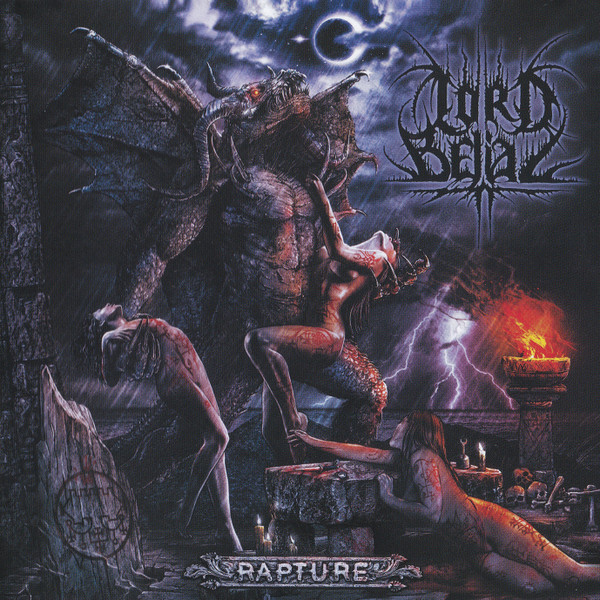 A somewhat unexpected return. After no less than fourteen years Swedish Lord Belial is back with a new album. With this year marking their 30th anniversary (though quiting and reforming at least three times) and releasing their ninth album (besides a handful of EP’s, compilations and a few other releases) it would be rather needless to introduce the band, but it is safe to say that with their first three albums ‘Kiss The Goat’ (1995, No Fasion), ‘Enter The Moonlight Gate’ (1997, No Fasion) and ‘Unholy Crusade’ (1999, No Fasion) they have delivered a few sub-classics in the second wave of (melodic) Black Metal. With this keeping in mind it is quite the statement of Hammerheart Records that with ‘Rapture’ they claim to be releasing their best and most mature album so far.

After releasing the aforementioned albums, Lord Belial got somewhat pushed to the background getting less exposure for the albums after the turn of the millennium. ‘Angelgrinder’ (2002, No Fashion) suffered from a substandard production and set the mark for further musical and commercial decline. Ultimately resulting in releasing their least successful albums in 2007 (‘Revelation’, Regain Records) and 2008 (‘The Black Curse’, Regain Records), soon after which they (again) folded. Their return, however welcome, is greeted with a healthy dose of “let’s see what they still can come up with”. Though both Lord Belial and the label might be close to the heart, you can’t always believe all those marketing tricks, can you?

So, what can Lord Belial can come up with anno 2022? Well, let’s start with saying that all the familiar elements are still there: the melodic guitars, the blasting tempos and the great dynamics – all topped with Andy LaRoque’s fantastic production skills. I could basically leave it at that, as this is what classic Lord Belial sounds like in my book. This seems to be Lord Belial’s most balanced record and delivers a good portion of Swedish Melodic Black Metal in the same vein as Naglfar, Necrophobic, Watain or Dissection. Though, Lord Belial does not reach to the same levels of as those four genre-iconic bands, they evidently take a huge step in the right direction. Listen to the great Dissection-esque mid-section of ‘On A Throne Of Souls’, the great leads in ‘Alpha And Omega’ or the nicely incorporated choirs on the Spotify-single ‘Belie All Gods’ and on the epic closer ‘Lamentations’. They all sound catchy, inspiring and fresh, not much like a band that has been in-and-out of hibernation and releasing a few mediocre albums since their last reincarnation. The musicianship, the creativity and the ideas are certainly there and promises a brighter future than they may have ever had. A lot of credits, however, go to Andy LaRoque too for delivering one of his best production-jobs I recently heard from him. It really propels Lord Belial to a bigger level and leaves albums with a rather murky sound, like the aforementioned ‘Angelgrinder’ or ‘Nocturnal Beast’ (2005, Regain Records), behind.

So, was Hammerheart Records’ claim right? Of course I do not blame Hammerheart Records for their enthusiastic marketing campaign, but to say that ‘Rapture’ is Lord Belial’s best album is a bit of a bridge too far. But I am willing to state that this is certainly their best effort since the 00’s and that, fair enough, is quite an achievement for a band that has been around for three decades. Fans of the early works of the band or those who (still) love that Swedish Melodic Black Metal sound definitely should not ignore this pretty impressive return of Lord Belial. (FelixS)