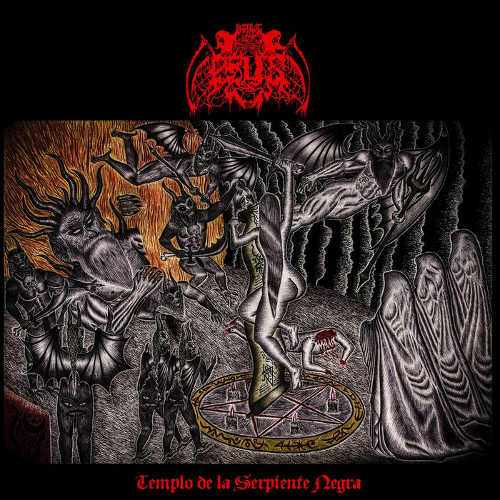 Kvlt of Eblis, a name taken from the Eblis or Djinn, invisible Evil Spirits which roughly translates to “Cult Of the Djinn”. Kvlt Of Eblis was formed in 2015 and made the most of their 2018 debut full length by crafting this dark and brooding collection of tales of the Occult.

This album opens with an intro entitled “Apertura A Los Negros”,which is a chilling taste of the darkness to come. A slow tribal drum sets up the eerie atmosphere and is finished off by the near Voodoo like spoken chants of Metzli Jiz Rulicum, the bands Female Vocalist. A slow dark prelude to the chaos that follows thereafter. After the ominous intro, the album takes a twist into aggression with its raw guitars and vile vocals. Metzli Jiz Rulicum’s vocal performance pays tribute to the early Scandinavian Black Metal revolution. Grim and gritty (and the occasional chilling clean) vocals lay overtop a series of thunderous blast beats and double kick rhythms that are blended together in impressive fashion by the guitars dissonant and near Fuzz-like guitar tone. You will find some rememberable riffs and vocal patterns on this release to say the least, because of the refreshing blend of mid tempo and fast aggressive tracks that fill the innards of this album.

“Templo De La Serpiente Negra” may interest fans of albums similar to “On the Sortilage of Christianity” by Lucifugum or to be honest, any of the early 2nd wave European Black Metal acts. The production feels like a pleasant blend of raw grit and refinement as it does not sound too harsh nor over produced… it is a near perfect balance. If grim Blackened tales of Hecate, Lilith, Death and Occult Magic appeal to you, consider giving this Columbian hidden gem a listen. Hails and Horns! (Azag Galla)