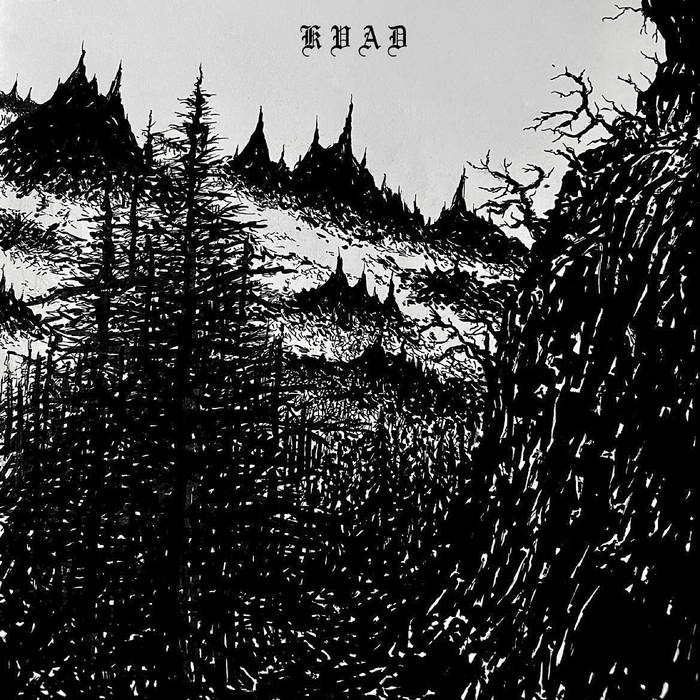 This Norwegian act has chosen a cover for its debut-album that is very much in the same vein as many of their fellow countrymen, it depicts a cold scenery of a pine tree forest. Of course, properly in black and white. Of course, this is Black Metal. The Norwegian duo however, doesn’t take the easy path and are not much like many of the (bigger) Norwegian classic Black Metal bands.

Instead Kvad brings forth a kind of Black Metal that is raw and comes with a suffocating dense wall of sound. The whirling guitars blend together with the rather basic kind of drums into an icy and hypnotic soundscape that enchants and haunts the listener at the very same time. The equally cold and distorted vocals also add to that same impervious atmosphere. With ‘Cold & Dark, As Life’ this EP has gotten a very appropriate title and fits just like a glove. The music of Kvad does come to me as mixture of classic American Black Metal that gets blended with the buzzing sound of current Eastern European bands. The great enthralling melodies are woven through all songs and function as a kind of anchor throughout the music.

It is, in a strange way, kind of refreshing to listen to a Norwegian band that, for a change, is not overly influences by Darkthrone or Gorgoroth. But it is of no real importance where a band is from or where it gets their influences from, what does count is the music. Kvad has not (yet) reached the same level of quality like a band such as Nordgeist, but this is a very promising first album nonetheless.