Krolok – When the Moon Sang Our Songs [Demo – Re-release] 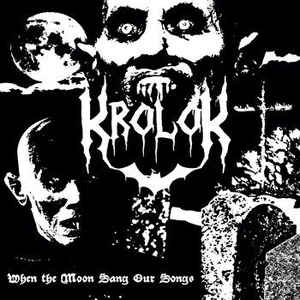 HV of Remmirath decided to start a side project in 2011, to create raw atmospheric Black Metal in the Nordic 1990s vein with vampyric themes, so moons, castles and rituals are all over the place. Once can ask why Inferna Profundis Records decided to re-release a demo that was released on cassette and only had 24 copies by Už Bolo Dosť! Productions? Are we dealing with a totally overlooked masterpiece or is the bloke behind the label a huge fan of it?

The label itself calls it “eternal and bewitching” and although I’m not convinced by those words, it is certainly sounding “old”, capturing a dark atmosphere and is in the vein of the early and mid Nordic 1990s. It is no coincidence Krolok has covered Carpathian Forest’s “Through Chasm, Caves and Titan Woods” of their “Through Chasm, Caves and Titan Woods” EP. This demo is certainly not a bad one and deserves a release more than 24 copies, but I would fool you if you missed out on something. (Ricardo)