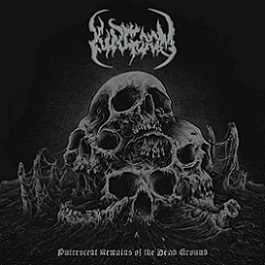 Founded in 2003, Kingdom already released 3 albums, 1 demo, 1 split and 1 EP prior to their newest and 4th album called “Putrescent of the Dead Ground”. These Polish guys love their death metal fast with chaotic riffs reminiscent from bands like Morbid Angel, Angelcorpse and Carcass with a slight Black metal touch here and there. No worries, they can slow down and let the groove hammer swing,  making this album heavy as fuck. Trademark of each album is a cover version, this time it is Immortal`s “Blashyrkh” which is well executed. I mostly prefer their slower songs as I think that`s where they transport the atmosphere best. Towards the end of the album, surely the highlight, they manage to bind all the ingredients perfectly, making it a fantastic song that stood out. The production is quite good but the drums could have been a bit more in the back with maybe a less pounding „each hit must be hard and loud“ snaremix…but hey, that`s just me. Fans of brutal, dark chaotic, Blackened Death Metal should risk an ear. (DPF)