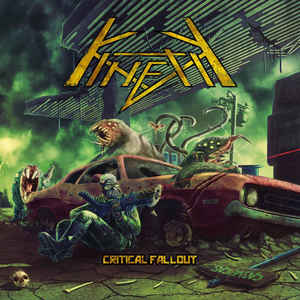 The Italian Thrash metal band KinetiK’s 45 minute long first full length album Critical Fallout by Punishment 18 Records is one of those albums which blends the old school Bay Area-ish sounds of bands like Slayer, Sodom, Overkill, Metallica, Megadeth, Testament, Exodus and even probably even Pantera’s grooves, as well as progressive elements like Coroner. The work is made by 11 tracks with 3 tracks from the older EP “Greed”. The last 2 tracks, “Fallout” and “Eymerich”, are inspired from the renowned video game series “Fallout” and the main character from the graphic novel “La furia di Eymerich” (“Rage of Eymerich”) by the Italian writer Valerio Evangelisti respectively.

The whole album is relentless and aggressive, and portrays the bands mature composing skills in combining a lot of old school elements and their own modern instrumental textures, apart from the similarly impressive production quality. The album starts out with marching snares heralding the upcoming nuclear fallout… followed by so many amazing tracks like “Greed”, “Revenge”, “Abyss of Humanity”, “Conspiracy Theory”, “Warped” and “Fall out”. But my verdict inclines towards the last track “Eymerich” (probably the longest in the album), due to its more dramatic writing unlike rest of the tracks in the album taking hold from the ambient acoustic pluckings to all the way to epic insane thrash lashes.

However it needs no justification here that the bassist is a freaking monster, who delivered technically crushing yet deep basslines throughout the album, specifically in “Revenge” and “Greed”. The guitar riffs though killer sound most dynamic during the instrumental track “Conspiracy Theory”, “Warped”, “Fallout” and of course “Eymerich”, spearheaded with blistering arpeggiated shreds. The vocal also has an range like that of many iconic early thrash metal frontmen like James Hetfield, Joey Belladonna, Steve Souza, Tom Arya… The lyrics perfectly portrays a lot on horrifying human monstrosity, including social, religious and nuclear, and following probable zombie apocalypse like aftermath. Finally sick album art by Cosimo Fabrizzi, enjoyed every bit of it especially the red corvette in the middle of the post nuclear warfare. (Imtiaz)