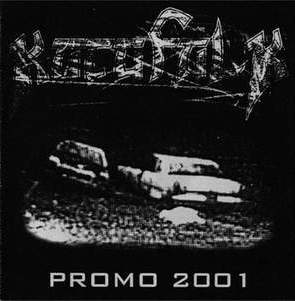 Here we have another band from our home country Holland. They have been around since 1995 and this is their second release after a demo in ’97. They give us the pleasure (or displeasure for some) to listen to 3 of their tracks. Katafalk play extreme black metal, in the vein of bands like Marduk and Dark Funeral. However also some influences of thrash and death metal can be found and the singer also uses some grunts. The production is okay, but I would have preferred a thicker guitar sound. They use a lot of blast beats but also added some mid-paced parts to ensure some variation. All in all a good release from a new promising band. Let’s hope they’ll record some more stuff soon, perhaps a full-length album, who knows? (Saldiac)