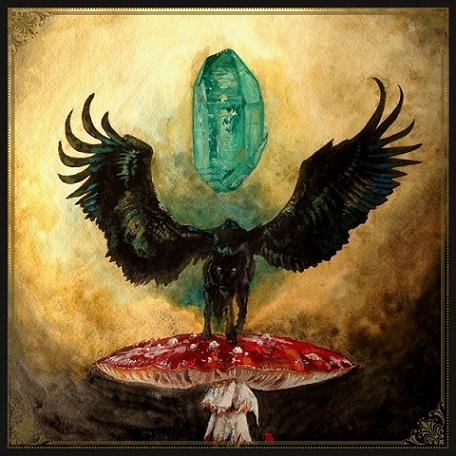 With members coming from Spain and Germany, Jade is a band that could fool the less attentive listeners as it goes back to an old Canadian Heavy Metal band from the first half of the 1980´s. But that’s not the case here. This Jade is an arcane entity that performs an killer atmospheric Death Metal that features many extreme Metal references from bands like Necros Christos and Bölzer, as well as some more dense guitar lines that sound a little bit like Black Metal.

There are only 4 songs, but that really rule the environment where it is listened to. This EP opens with the monumental “Jade Emperor”. A powerful song, with many tempo changes, vocals that goes deeper and screamed in an aggressive way, but never so Black Metal or Death Metal, but as a blend of both styles. The next track follows in a doomier way. “Dead Stone Mask” is really a great composition as its heaviness and melodic approach are totally catchy and obscure. “Blossom” brings more speed, albeit in a cadenced form, but maintains the mood and heaviness. The vocals on all songs are very good and the tone is very traditional and I really enjoyed it. The last track is called “Smoking Mirror” and it is the most ethereal song presented in this release. The musical details are really classy and the melodic lines make this song my favourite one.

Sometimes old Amorphis comes to my mind while listening to this song, but less epic, but much more darkened and sullen. This band is a really nice surprise and it could easily be in a best of… list. (Fabio Brayner)