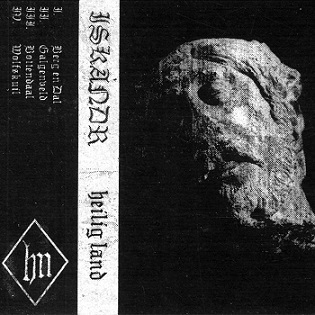 Heilig Land, literally translating to ‘Holy Land’, is the first full length and also first musical output of this Dutch one man project. First released in the summer of 2016 on tape by Haeresis Noviomagi in a limited edition of 55 pieces and in early January of 2017 repressed on vinyl and CD by Mysterion and Arcane Angels. The first thing you’ll notice when playing this album, consisting of 4 tracks and a runtime of 40 minutes, is that even though it has that perfect primeval, underground sound it also sounds very experienced. This isn’t music made by a first timer. And indeed it isn’t, since O, the mastermind behind Iskandr can be heard on a wide array of different underground Dutch black metal bands like Turia, Galg, Lubbert Das and Fluisteraars. Heilig Land plays with heavilly doom influenced drums and ice cold guitars reminiscent of Drudkh. With vocals that are often more in the background then the foreground. Giving it a very tortured and sinking feeling. The sound simply surrounds you like an thick, muddy lake you can’t get out of, claustrophobic seems to be the best way to describe this music, and that is how I like my black metal. Unforgiving, unfeeling and going straight into your head for 40 minutes of intense, underground black fucking metal. Extremely recommended. (Svart)