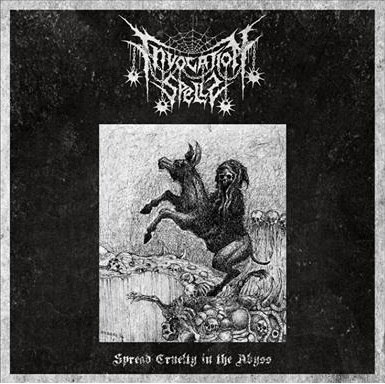 Invocation Spells is a Chilean Black/Thrash duo featuring Obssessor and Witchfucker as the stage names of the band members. For those in the know, that alone should tell you everything you need to know about this release. If you’re not in the know, here are some clues. South American extreme metal is pretty universally raw and filthy, with some of the best of it hailing from Chile. The choice of stage name by the two instigators of this madness suggests purposely offensive blasphemy, and this release definitely meets the foulness quotient with rotting colors. Finally, Black/Thrash, as a genre is vomitous and bilious. Again, Invocation Spells checks this box with and admirably destructive stench. To be honest, I’m very picky about Black/Thrash. Even releases that other trusted listeners are raving about often strike me as hot garbage, and not in a good way. So, when I find a release like “Spread Cruelty in the Abyss” that captures the spirit of one of the most raw and nasty genres there is, and yet is engaging in it’s foulness, I feel I have to speak up about it. The project has been spreading pestilence since at least 2014. I can confirm from my own collection that their 2016 release “The Flame of Hate” is also worth your time. Get it. Get filthy! (Hayduke X)