Invocation of Death – Into the Labyrinth of Chaos 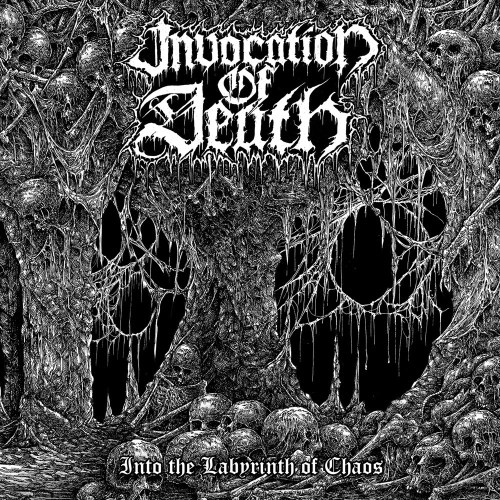 Some blokes in El Salvador have a wide range of taste with Extreme Metal, because being in bands that play Black / Thrash, Death / Thrash, Doom  / Death and Black / Death Metal isn’t enough, there should at least be an extra band who play Old School Death Metal, the Swedish way as well. And there you go, (ex-)members of acts like Witchgöat, Morbid Stench, Conceived By Hate, Disorder and Destroyer Attack gathered around and formed Invocation of Death to satisfy their thirst for some HM-2 influenced Death Metal.

Although the vocals have a more dark twist, even  late Morbid Angel’s David Vincent sometimes, than a contender for the Matti Kärki or L-G Petrov sound-a-like contest, the music itself have more resemblances with Grave (the groove), Evocation (the melody lines on “Tales from the Tomb”) and some slight Dismember touches as well. But when you hear a more mid-tempo and doomy track like “Crawling in the Dark” or a pure US Death Metal-influenced track like “The Convenant”, you will definitely hear they won’t limit themselves to the Swedish scene only.

Not a tremendous album as there are better releases lately, but never had the urge to skip a song or the album altogether. (Ricardo)