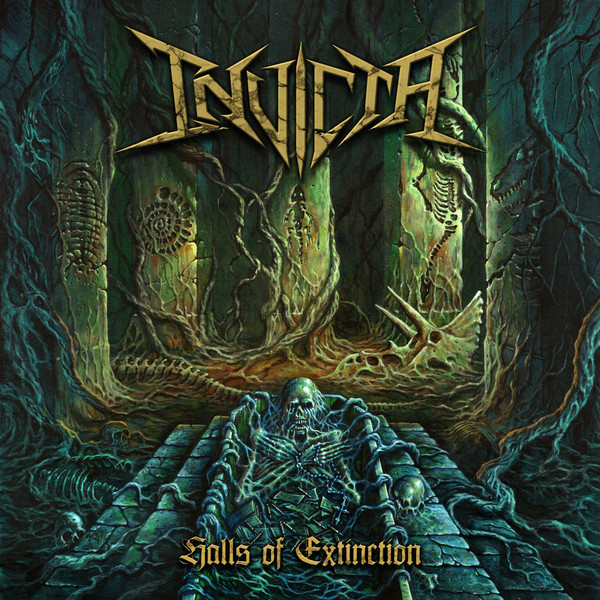 Canada is one of the best spots for 80s and 90s metal scene hands down. We’ve been graced with Annihilator, Voivod, Gorguts, Razor, and fucking Cryptosy! Had a chance to sit down and give full attention to Ontario based trio Invicta, their 2019 LP “Halls of Extinction” and it brought me back to a simpler time, rekindling my admiration for Thrash Metal versus the infinite subgenres as of now.

Invicta wonderfully captures the Thrash Metal sound that is reminiscent of previous bands mentioned, blended with melodic riffs that don’t drag and some aggression in the vocals suggestive of Kreator’s Mille Petrozza. With eight elongated tracks marking few minutes shy of an hour, “Halls of Extinction” did not bore me whatsoever. Album art by Mario Lopez, beautiful detail of an ancient tomb, with nature webbing around the caskets and pillars that stand towering over ancient preserved bones of animals and skeletal remains. Production on this album is crisp, smooth, and clean (which normally I detest) but this LP works well with it. In awe that every instrument can actually be heard, and always a plus when hearing bass take spotlight, ESPECIALLY in “None but Ash”. Between Jonah Kay (guitar) and Kyle Edissi (vocals/bass/guitar) the chemistry meshes between intricate solo work of sweeps and pinch harmonics to create an array of Thrash meets melodic that can be coined harmonious throughout the album, love the solos during opener “Terminal Brutality” and their closer 9 minute instrumental “The Rapture.”

For a band to have released this independently is inspiring considering how the sound is fucking on point. Check out this LP and show these guys love. You can hear the heart and soul put into it and it’s so fucking well done. (Tori Belle)