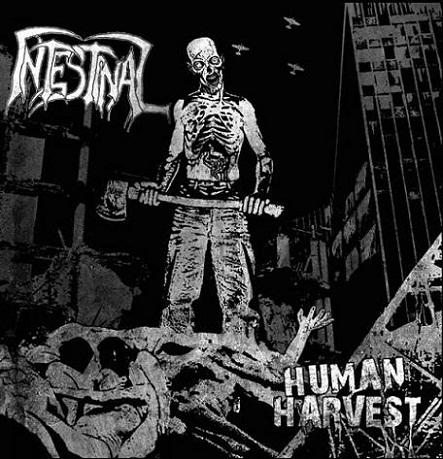 When it comes to raw and sickened stuff from Sweden, probably you may think in acts such as General Surgery or Necrony…more recently let’s say that Mr Death is another promising band into this type of stuff. Well now we have to talk about newcomers Intestinal and their brand new debut album “Human Harvest” that has been unleashed upon mankind through the polish label Psycho Records.

Even when conceptually these folks are pretty closed in some elements to General Surgery or Necrony, the truth is that musically are very different, for example, Intestinal has less grinding parts and many more mid tempo/catchy passages, if wouldn’t be for the sounds textures, I can even feel some old Entombed reminiscences. On the other hand, the guitars are really interesting especially because they sounded me like those guitars recorded at the Sunlight Studios in the early 90’s…probably from here is where most of the old school feeling comes, and of course, without forgetting the bass lines that as usual, are performed with a strong distortion to keep that feeling of sickness. About the vocals…well basically we have growling grunts all around something really particular because most of the bands into brutal/Gory/Grinding stuff, tend to use two voices, one high and one lower…but that is not the case with Intestinal, which honestly is pleasant because instead of filling everything out with screams and growls, these guys basically sing where it should be.

One thing I really found interesting about these guys is that they have a concept…I mean, from the very first moment you see the album cover, and open the inlay card, you know what to expect, they have pretty clear that Intestinal should be sick & cruel…that’s what you get while reading the lyrics, seeing the band pictures and listening their stuff, this is really important because shows these fellas have a direction clearly defined and if they continue working on the same direction, is sure the next album will be even better.

In the mean time, we can enjoy this nice piece of Swedish death metal played with an old vibe and focused on evil & twisted matters, I can assure you that we will keep listening from these guys in the future, so…if I were you, I would contact the band and/or the label (Psycho Records) to get a hold on this one and start your campaign of self mutilation and punishment. (Master Butcher)