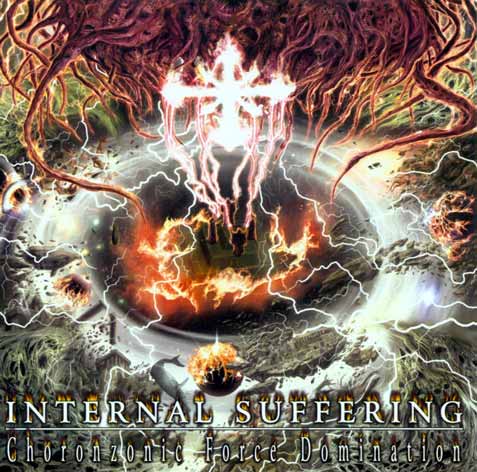 Internal Suffering’s “Choronzonic Force Domination” is “Gefundenes Fressen” for blastbeatfetishists among us. These Colombians go full throttle on their fourth release and rarely take some time to slow down. Only the titlesong has some breaks in them and to be honest I hoped it was a trend for the rest of the album. The first song gave me hope that a South American deathmetalband with that trademarked sound and speed, such as bands like Krisiun, Rebaelliun a.o., could do a bit more than just mere lightspeed shredding. But after just one song with breaks and good riffs, Internal Suffering is speeding ahead like a maniac, with no attention whatsoever for any diversity in the form of clever breaks, guitarleads, drum- and vocal patterns. I guess I’m hyperblast tired, I just can’t fully enjoy such blastfests anymore as I heard so much already. To be honest I can’t imagine what Internal Suffering has to offer what hasn’t been done before (and better) by aforementioned bands. But, if you can’t help yourself and just crave blastbeats, highspeed riffs and guttaral rumblings this is your thing. In conclusion it’s safe to say Internal Suffering released the fastest album of the year. (JefferyVDK)