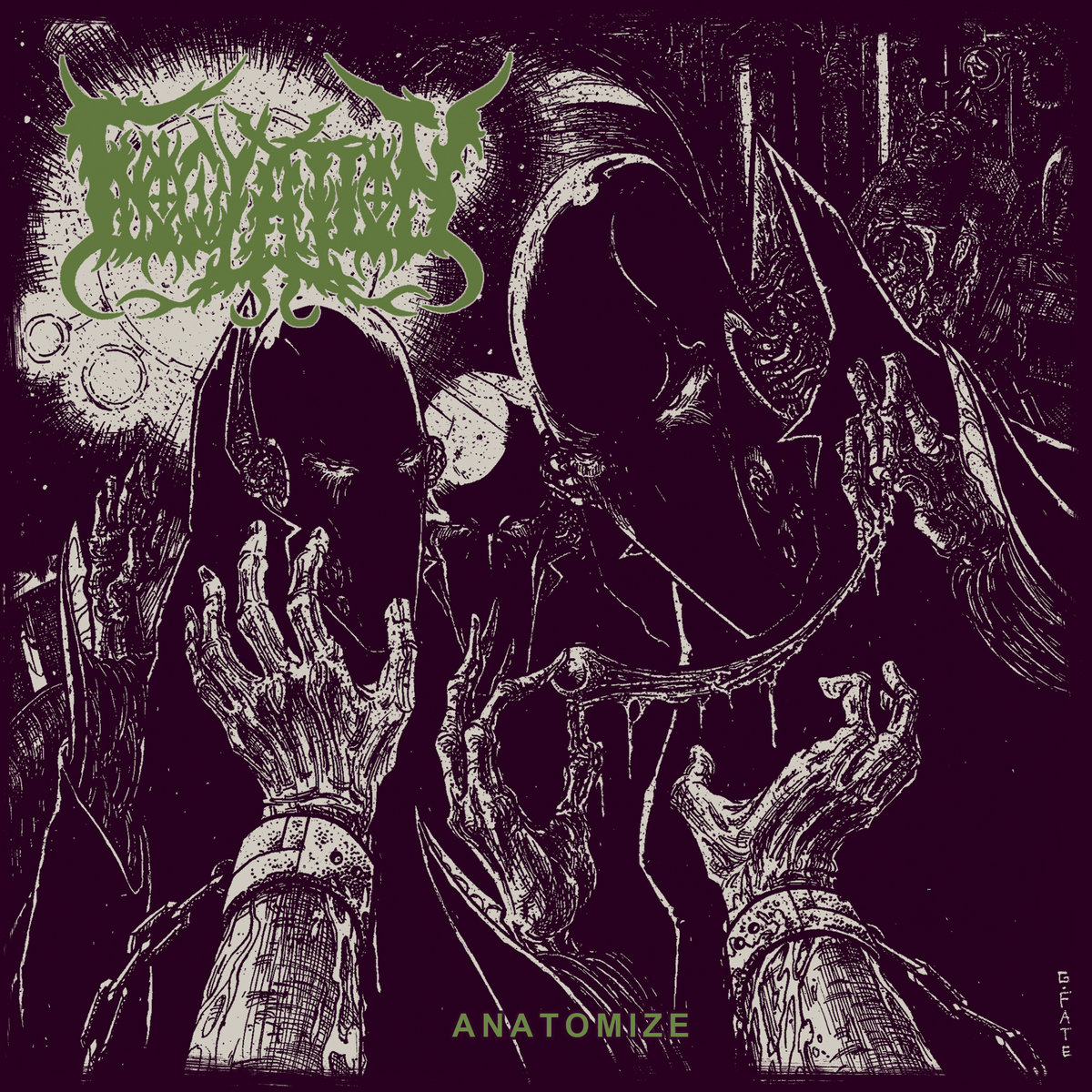 Maggot Stomp strikes again!  It has become the label synonymous with general Cave-Mannery;  Including, but not limited to, punching Sabertooth Tigers to death, burning weaker men mercilessly with the fire that one has created and force-feeding Brontosaurus burgers to prehistoric vegans at heavy club-point.  Maggot Stomp is churning out knuckle dragging, stone crushing savagery of the lowest order at an alarming rate. And I adore it.

The roster includes parking lot trollops Eoncoffinized, Church of Disgust, Frozen Soul, Malignant Altar, Mortal Wound, Kommand, Rotted, Disembowel and the aptly named Sangriasluggydongg among others.  Requisite Sanguisugabogg joke behind us, the recent addition of Ohio’s Inoculation show that Maggot Stomp may have an interest in expanding on their generally IQ reducing wheelhouse and incorporating some technicality into the stone-age.

I am not talking of insanely overproduced and absurdly technical wankery, but shit descended from the likes of Deeds of Flesh and Odious Mortem as well as “Vile Conception”-era Hour of Penance.  Indeed, highbrow influences for a band signed to a label where the brows are typically so low and prehistorically large they usually can’t see past them to admire each other’s excessive body hair and ultra-meaty riffs.

Inoculation’s 2018 full length debut “Pure Cosmic Dread” displayed enough pure musicianship and songwriting to grab my attention, but the 2019 EP “Anatomize” grabbed my balls…hard.  It seems to be the fortuitous amalgamation of two juxtaposed sonic entities; Hopefully, serving as the template for the impending flood of Alien-Caveman Death Metal. The musicianship is stellar with excellent production that is not as clean as “Pure Cosmic Dread”, a definite improvement from my perspective.

“Nocturnal Levitation” possesses a fantastic meandering tapping lick with a motif which is repeated in a couple different iterations throughout the song.  There is a brief section midway through the song that brought Artificial Brain to mind as well as an off-kilter warbling solo that isn’t an eye-rolling, weedily-deedily, tip-tap-tappy sweep-pick fest. A phenomenally structured and well executed song.

Not to be overshadowed, the title track starts judiciously, showcasing some nuanced bass work, and then really kicks into high gear, relentless drumming pummeling the listener throughout the song as well as a variety of intricate riffs, catchy licks, skronky bass and aggressive, rapid-fire vocal assaults. This EP is one of the best and most complete eight minutes I have heard so far this year.

So how exactly did Maggot Stomp get their hands on a classy, inter-galactic savvy band like Inoculation?  (WARNING…that’s ALL the useful information in this review…Seriously, ALL of it. I only recommend continued reading at this point if you are obsessed with Maggot Stomp like myself…or are a complete dork……  I know you are a fucking dork….keep reading)

Birth of the Inter-Galactic Cave-Aliens: An Origins story

Inoculation’s frontman awoke wracked with confusion and a pounding headache in a subterranean dungeon of some sort, rubbing a giant knot the size of a golf ball on the top of his head.  His fingers got tangled in the rat’s nest of his blood-matted hair. As he gained some clarity of mind and got his bearings in the dim light he noticed he was in a primitive cage of some sort with his bandmates strewn on the ground inside.  Cleveland, Ohio’s inoculation had been kidnapped!

He looked out beyond the cage with bewilderment.  There were several small fires built around the cave, and the floor was littered with an assortment of objects.  Pabst Blue Ribbon cans, rolling papers and piles of bones from countless racks of ribs and turkey legs. In the corner there was a pile of guitars and Basses with missing strings, broken amps and cords with frayed edges.  A glimmer of recollection popped into his head at that moment. He remembered that Inoculation was practicing when they were accosted by a group of hairy men bedecked in blood-soaked animal fur loincloths and terrible sunglasses from the early 90’s.

About 2 minutes into “Hypnotic Regression”, the double pedal bass drums propelled the incredibly heavy beatdown section like a tank, while chugging triplets assaulted the atmosphere and otherworldly distorted vocals demanded the immediate destruction of all nearby objects.  As the intensity overflowed the power was abruptly cut. They all turned to the back of the room to see what appeared to be the members of some sort of Man O War-meets-Captain Caveman cover band. Inoculation’s collected cry of “what the fu……” was cut abruptly short by a series of grunts as they were forthwith smashed in the head with large heavy clubs to the battlecry of “ughhh……. MINE, MINE…..uhhhhhggg”

Prisoner Alpha was brought back to the present as his bandmates started to rouse.  A series of moans and “where the fuck are we” were silenced by Alpha; “shhhhhhh…..shut the fuck up.  I think we got taken to the disgusting Maggot Stomp lair”. Prisoner Omega was incredulous. “Why the hell would they take us?…we do space and alien shit that’s nuanced and requires brain cells…not caveman sht.  I mean they are sick as hell but……”. His sentence was rudely interrupted by Alpha. “shhhh…I don’t know why they took us…but look around”.

The scene before them unfolded like a pre-pre-modern nightmare of Mastodon-esque proportions.  One disgusting specimen was lying on the ground biting his own toenails and spitting them into half-full whiskey bottles.  Another was not-so-delicately getting a fresh mullet etched into the sides of his head with sharp rocks while the “barber” rocked out to overdubbed cassettes of old esoteric demos from Ken’s Death Metal Crypt on his walkman.

The walls were covered in primitive cave art that seemed to be more instruction-based than artistic.  The image of a clean shaven man’s face was crossed out, while a similar image adding long hair and a hefty ‘stache enjoyed a circle around it;  Finally, a third image resembling the second with the addition of a mullet and oversized reflective shades was surrounded by elementary drawings of stars.

Their attention was then drawn to one of the cave’s denizens squatting in a corner.  He seemed to be shitting into his own hand and using his excrement to make smiley faces and hearts around a large, primitive etching of “Maggot Stomp Death Metal” and alternately smelling his own fingers.  Prisoner Alpha threw up his arms and started getting belligerent. “See…I fucking told you it was Maggot Stomp’s piece-of-shit lair”.

This clearly drew the attention of their captors as a group of shirtless heathens dropped their makeshift stone weights and lumbered over to the cage adorned in a variety of fur adornments, acid wash jorts, denim battle-vests, white high-top sneakers and Pit-Viper Sunglasses as if they were afraid they might go snow-blind inside of a cave in the middle of California during the summer months.   “Why the fuck are we here??”, Alpha demanded. The question did not seem to register as they all looked around at each other grunting and trying to flick each other in the dick. Alpha tried, to no avail. to communicate with the horde of sub-humans.

He slowly tried to convey the information.  “Weeeeeee…..we are Inoculation. Innnnoooccculllllaaaation”.  Alpha was met with blank stares and grunts. A fat one threw a half-eaten rack of ribs inside the cage.  “NO…No…..weeeee……play…..music”. Alpha pantomimed guitar and drums while the rest of the band started to join in.  The fat one laughed and clapped his sausage fingers together as large chunks of meat fell out of his mouth. The others screamed in guttural fashion and started an impromptu mosh pit nearly knocking over the cage.  Alpha turned to his bandmates…”See….now we are getting somewhere”. “Weeeeeeee…..need….. MONEY…..moneeeyyyyyy….to fix vannnn”. As he held out his wallet to show cash and pretended to drive a vehicle there was a glimmer of understanding among the Cretins.  They started grunting and smashing their hands on their chests; Chanting “McGrathnar…..McGRATHNAR……MCGRATHNAR!!!!”

A commotion around the corner grabbed everyone’s attention.  Several giant blocks of ice were pushed into view and formed an ice luge of some sort.  Prisoner Delta was perplexed. “Where the fuck did they get those giant blocks of ice!?”  Before they could discuss this, two mongoloids in arctic furs lifted what appeared to be Macho Man Randy Savage in full bedazzled regalia to the top of the luge and ushered him to his graceful descent down the ice slide.  As he landed, they all dropped prostrate on the floor. McGrathnar smoothly approached the cage.

Alpha turned to his bandmates incredulously and started, “Who is this Macho Man motherf….”  “silence!” McGrathnar castigated his insolence. “Oh…you speak!” they all started, relieved.  McGrathnar shook his head. “Of course I fucking speak….you think these neanderthals can coordinate recording and releasing their own cassettes, vinyls, T-shirts and merch?  The tassels on his jacket swayed as he pointed to his Death Metal harem. Inoculation then sat in silent awe as McGrathnar weaved an elegant tale of world domination. Death Metal spanning the entire gamut of IQs.  With enough cash flow to prevent tour van breakdowns from ruining tours due to expensive repairs EVER again.

McGrathnar spoke with the fervor of an early 90’s WWF Superstar.  “Did you ever want a soundtrack for passing the time away daydreaming about being a primitive Earth Barbarian traversing the universe crushing alien hordes?…Whom, against all odds is able to overcome advanced technological war tactics through sheer badassness and a giant battle axe with flails on the end and a mace at the handle?”  Inoculation was extremely confused. He continued “Well…here you go you fucking nerds…I need to merge our sound with your sound to make the soundtrack for Intergalactic barbarian alien savagery!!!”

Alpha looked at Omega, then Delta, then Beta and took turns slowly nodding their approval amongst themselves.  Then, he turned and McGrathnar and Alpha clasped hands like 2 ‘roided out action heroes from an 80’s action film and the deal was done.  Everyone started to hold up big rocks like UFO’s while making stupid spaceship noises. Some started to bring alien blowup dolls covered in leopard fur Unitards to the cage as some sort of celebratory offering while McGrathnar handed out new Pit Viper sunglasses to all.

It may have been McGrathnar’s flourish, the way he started smashing everything around after his sales-pitch, or it simply may have been the fact that he told them he would also never let them go and feed them to Sanguisugabogg if they did not sign to the label, but Maggot Stomp Records had landed a fine band with inoculation that day. (Chris Topher MC)