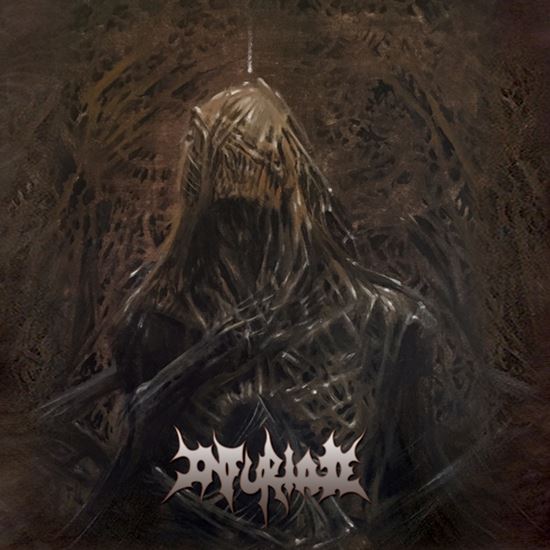 In recent years only a handful of „brutal“ death metal bands in the vein of Suffocation and Deeds of Flesh grabbed my attention since a felt an oversaturation missing the qualities of some of the pioneers of the genre. Now I found a new addition to the selected artists in Infuriate. The band succeeded on multiple levels on their self-titled album. The riffs are killer alternating between muted chords, tremolo picking and octavated chord work, as well as Severed Savior like twin guitar disharmonies. The vocals are top and respect for not falling into the “only pig squeals” and such pattern. The songs have groove, punch and enough speed which should appeal to fans who like the entire brutal death spectrum. Big respect also to the drum and bass department because of the  fantastic lines, fills and beat variations. Great mix of bands like Suffocation, Severed Savior and Deeds of Flesh with a slight amount of Angelcorpse/Morbid Angel here and there. Well done! (DPF)

2018 has undeniably been an amazing year for Death Metal. There has been a steady stream of releases that push death metal to new places as well as albums that remind us of why Death Metal is such a powerful and appealing subgenre of metal. Infuriate fits in with the latter. This Texas based band has released an album that combines the technical bombardment of “Pierced from Within” and combines it with the streamlined memorability of “The Bleeding”. In short, it rules.

This is an all out assault of the senses but it is a pummelling that you won’t soon forget due to the razor sharp songwriting and incredible riffs. Opening track “Juggernaut of Pestilence” is a tour de force death metal song and is set to kill from the opening notes. Crunchy and rhythmic, the band manages to pack the songs with a tremendous amount of energy and riffs that will stick in your head like a piece of flying shrapnel. You know there is a piece of metal stuck in your skull and you can feel the warm fluid pouring down your face, but you are still smiling ear to ear as you enjoy the maelstrom.

Next up is “Slaughter for Salvation” and it opens with a riff that wouldn’t have been out of place on “The Bleeding”. It has a strong “She Was Asking For It” feel to it and it starts the song off with a bang. “Only Pain Remains” also opens with a very old school Cannibal Corpse riff before the band flexes their muscles and begins to let their fingers fly. This song actually has one of my favorite moments of the album when the band slows down and adds in some very cool bending to the riffs, giving this section a very sinister feel to it. The album ends with the incredibly titled “Cannibalistic Gluttony” and with it brings some riffs that evok vintage Deicide. Another cool moment comes later in this song when the band brings in some almost melodic riffs and a thrash beat.

Above all what I dig about this album is that it sounds like a real band. This is a stripped down and powerful sounding record that doesn’t let itself get bogged down with a lot of bells and whistles. The guitars are loud and heavy and the bass is right there along side in the mix. The bass player really adds a lot to the sound of the band and when he choses to venture away from what the guitar player is playing it really takes the songwriting to the next dimension. The drum performance is also really noteworthy as it sounds very natural and doesn’t seem triggered at all. He manages to have very natural sounding bass drums and it works since this isn’t a band that is looking to play a million miles per hour at all times. I would imagine this sounds pretty close to what the band sounds like live and that is always a good thing.

I know that comparing a band to two established bands like Suffocation and Cannibal Corpse may seem like a cop out but honestly describing Infuriate as a cross between “Pierced from Within” and “The Bleeding” just makes the most sense to me. Those two albums to me are the pinnacle of their careers and if you are going to take influence from somewhere, why not from the best? Infuriate have released an incredible death metal album that doesn’t try to reinvent the genre. It takes bits and pieces from the classic bands and makes it into their own. If you are a fan of Death Metal, you need to hear this album. (MikeH)