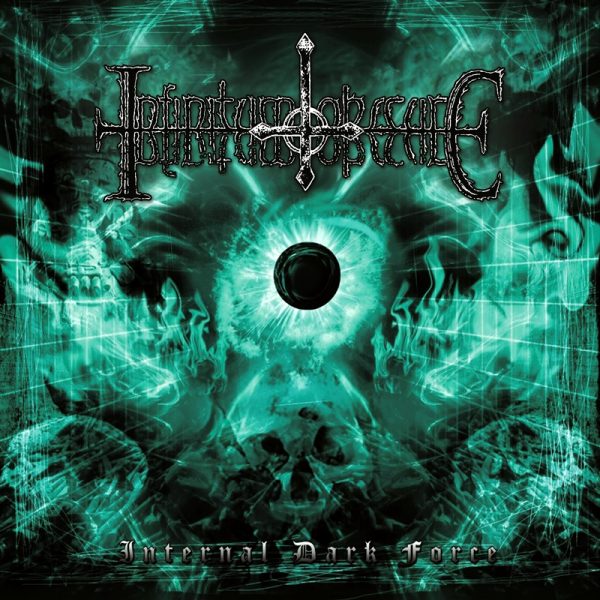 Mexican death metal legends Infinitum Obscure have reissued their classic debut full length “Internal Dark Force” on its 10th anniversary. Re-mastered by the founder himself, Robert Lizarraga; this reissued version has been released via their own label Death Elite records. From the heathen soil of Mexico where Cenotaph, The Chasm, Shub Niggurath are the absolute force of pure Death Metal Darkness; Infinitum Obscure is rather more hidden entity which merge the obscure, tormenting and self relieving death metal music of The Chasm, Incantation with the Swedish dismal sounding black metal school of music; but their otherworldly compositional depth, exquisite musicianship and lyrical artistry makes them a force of their own. “Internal Dark Force” is a dark and ritualistic dagger; a sonic manifesto of the complete perishment of humanity disease. “As Light Fades (The Coming Armageddon)” starts as an instrumental intro which is surely an invitation into engrossing darkness; a slowly built ominous composition that devours the essence of reality and will impose upon you to comprehend the impending doom that awaits us. “Where Death-Winds Blow” is the next offering into a desolate, menacing and miserable world of eternal torment and suffering which invoke total agony and chaos. Roberto’s dissonant melodies and guitar tremolo lines seems like wind of damnation approaching; with a larva flowing solo flare and doomed vocal delivery , you cannot escape the death wind blows here. “Possessing the Fire” has started with a Morbid Angle school of drumming whirlwind which is the most ravaging offering in terms of speed and wicked tempo shifting. Guitar maestro Roberto truly possessed fire inside him and this composition is an impious fury from his abominable will. Joel Marquez delivered some pure barbaric drums work here and thick, dissolved bass work makes this a more possessing entity. The evil and sanity devouring tremolo works here are seems like approaching the dawn of apocalypse and avowed by the legion of infernal light.

“Acknowledge the impious fury of my inner will.
As the river of anger flows…”.

“Beyond a Dying Sun” is like a roaring cracks of thunder ablaze; an unstoppable manifestation of total obliteration. Roberto’s infernal guitar wizardry; his rasping, croaking, shrieking vocal delivery, merciless drumming onslaught which spawned from pure pain and suffering; only to procreate the trans-dimensional tranquility. And at the end of firestorms and lightning, the elusive ending portrait the painting of a netherlandish beyond the sun landscape where all life has faded and light is swallowed by the fathomless darkness. There comes “A Quest for Vengeance” – this reaping battle raging crusade which truly embodies the spirit of our endless quest for vengeance. A composition which much more in the vein of mighty The Chasm; but Roberto’s ingenious song writing skill and twisted guitar work is purely engrossing and captivating. Like a fearless warrior of darkened pride; it’s Roberto’s conquest for once mighty empire with invincible pride, vision and devotion which is now corrupted and raped, but with strength and determination he call forth to rise in arms to defend this Ancient Cult of Death! “The Final Aeon” is an offering of envenomed raging fury where total eclipse unfolded and set forth to dive deep into the everlasting dark aeon. This is more in a crushing thrashy mood with fiendish riffing assault aided by straight forward percussive savagery. At the end, where the guitar solo burst out like triumph through darkness; and the everlasting atonality flows like larva of hatred; here with anxiety and agony you will envision the fall of time and awakens at the blackest end of demise. “Storm of Impious Hatred” must be forged with unhallowed revelation of hate which must prevail and with undivided force of chaotic divinity it’s the battle hymn to crush and burn the enslavers. Here maestro Roberto unleashed truly malicious spirit of eternal destruction through his six string weapon, brilliantly backed by compact drums bashing and vengeance seeking demonic vocal depth; which will be exposed you into a landscape where obscurity beckons, lightning strikes and uncontrollable flames of the demon-storm are set forth to exterminate fallacy and deceit . Experience a sonic battle with insatiable hatred where No mercy shall be shown for the weak… for truth and honor. “We have arrived” is a cover track from the debut release of American merciless thrash legend Dark Angel and it’s replaced the track “Path to apocalypse” which appeared on their original version. Roberto and his violent force surely did an excellent job here. The track name itself established why they choose to cover this classic as it represents the arrival of infernal dark forces from the fortress of malignance. Adding their own style of ferociousness and compactness, it’s a killer nod to the legends. “Shadowless Light” is a soul drenching acoustic instrumental and the final track of this darkness infested release. This ending is a transcendence unto a landscape where reality dissolves; with grandeur and burning strength you will envision the shadow less light; where you soul will be liberated by the purity of darkness and you will only worship the internal dark force and ready to accept total death. “Internal Dark Force” was another 2000 era death metal release when death metal music was in utter desolation and didn’t received the attention this magnificent release deserved. Murky and low-fi quality production also helps to keep its identity hidden. But now this reissue has received much more quality production and seems like the re-mastering has injected more nefarious energy and spirit. Like the darkness that always gives us delusions and illusions this revamped reissue would help you to discover many more dimensions and twist that this release behold. No wonder why Master Jon Nodtveidt personally chose them to open up for Dissection for their final (and cancelled) US dates. All the worshippers of dark, tormenting and obscure death metal should spend some of their moments with this release and support the dark death metal legacy of Infinitum Obscure. (Rocky)