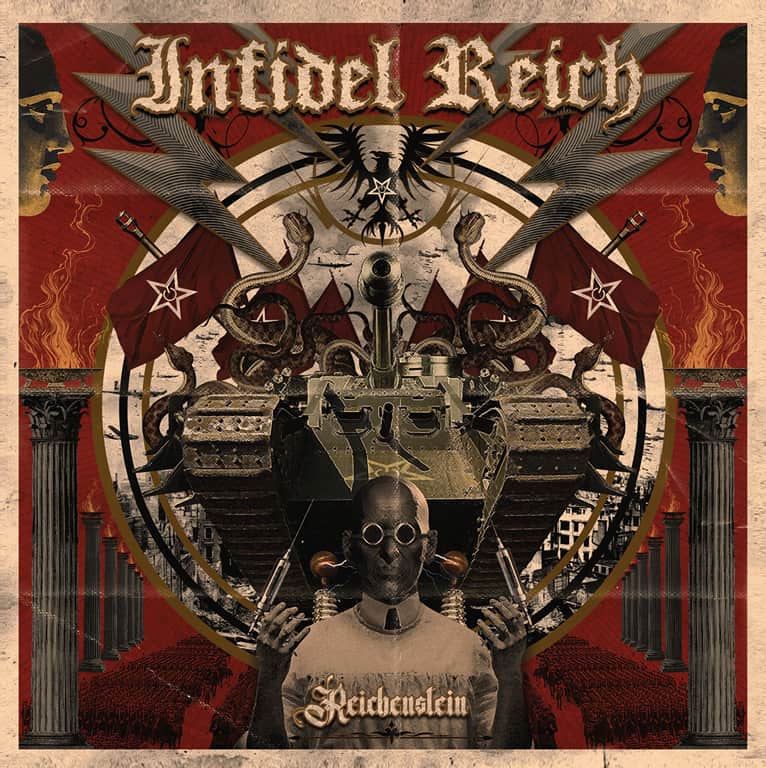 Infidel Reich. The name alone is guaranteed to raise an eyebrow or two amongst the do gooders and the self righteous out there, and they very well know this, and revel in their soon to be a lot more widespread infamy. Why do I say “Soon to be widespread?”, it’s quite simple really, as this release is a fucking belter. The added fact that these four plucky young international artists really don’t give an ounce of shit about what anyone thinks about them certainly adds to their charm, and the overall idea that they have recaptured the pure essence of what Metal is all about, that being one big fat finger in your face, and a “Fuck You” to society and all it’s crapulence in general, just makes the whole package even more attractive trust me.

Yep, not going to bother bleating on about the fact that some of these guys have been in some pretty impressive bands over the years, and well, still are including this one, because they don’t give a rats arse about impressing you with such namedropping pompous arsed tripe, no they don’t. They are here to vent, to yell in the face of the general populous about our politicians, our corrupt law enforcement, our broken system.They want to drag the money grabbing hypocritical religious types from their homes kicking and screaming and give them a well earned beating. They want to start a revolution, and for all us couch potatoes and ignorant types to wake the fuck up and have a good hard look around. They want you to understand that a better world is well within our grasp if we so wish to claim it instead of just sitting around pissing and moaning about how shitty things have become, and the way they are gonna make us listen is through the best means possible, Heavy Metal music of course!

The music man, the music, that’s what it’s all about. “Militant Death Metal” is what they like to call themselves, and I for one would not argue that fact, no siree, except it’s not really that simple. Right from the first fist to the face of the establishment, (after a little intro piece and some brief white noise type thingy), You can tell you are in for one hell of a time. “Reichenstein” is a monster of a song, bringing back intstant memories of another day and another time when bands like Motorhead and Venom to name a few stalked the earth, and one single fuck did they not give. The essence of Metal, right here baby, and you’d better believe it. This is pure “Reich & Fucking Roll” to steal one of their catchphrases, and damn great stuff at that.

“Killing Cultures” continues this theme, rough and ready, a call to arms and a voice for the downtrodden. Follow that with the ball tearing energy of “Gunzilla’s Stand”, and you should by now have a giant shit eating grin on your face. No pretentiousness here, no showboating or fancy fuckery ladies and germs, this is the middle finger you all deserve. Superb musicianship on display, a vocal style that would have Lemmy pouring another Jack, lighting a smoke, and smiling with that knowing look in his eyes. Cronos would no doubt pause in his quest for hair follicles and nod in agreeance, heck, he’d even start flailing around what he has left along to the riffery on display. So much ‘go eat a bag of dicks and harden the fuck up’ on display here, it’s hard not to be impressed.

I could go on all day. Track six, “Reich Fucking Roll” is total homage to the greats, starting with an oh so familiar bass line, and containing lyrics that if you don’t quite grasp, then you need to go back and redo your Metal apprenticeship, and that’s all I’m saying. Track eight “Nuclear Showdowns” notches up the level of how serious these lads can be, and will leave you cowering in that tiny bunker you’re father built way back in the eighties and now lies full of dust and old tins of spam because people forgot that the threat is still real, and you’d better believe it. Number nine, “Victims Inc.” has a razors edge to it, will no doubt induce some of the sickest moshpits outside of a Napalm Death concert, and is the lecture you all need to hear about personal responsibilty and just not being a fucking knob in general. So much anger, mixed with a bit of spite, and a dash or ten of vitriol. Listen up you lot, and listen well!

Hymn to victory takes us out, two versions of it to be precise. Lucky us hey! You get the ‘standard’ version, and the ‘Reich version’! How good is that! What’s the difference? Well now that would be spoiling it for you now wouldn’t it! Everyone hates a good spoiler, can you imagine the whining if I did? The interwebs would be thriving with sooks for days until they found something else to be offended by, and this would then prove the entire credo of these fine chaps. Stand up, be counted, stop whining, challenge authority. Stop caring what others think about your opinions, hold those that are purely evil to account for their actions, and be accountable for yours. Wake up, political correctness is not needed here, let’s all throw off the shackles imposed on us by people that want to control how we think or what we write and so on.

Also, and this is a big one, have fun, Reich the fuck out to some damn fine tunes, be a good person and share great music. The spirit of Heavy Metal is alive and well, you can take it from Infidel Reich. Unleash the beast within, fuck man, they are inviting you to! Yeah I missed one, don’t get upset, you’ll work out what track seven, “Selling Salvation” is all about, I’m sure of it! (The Great Mackintosh)