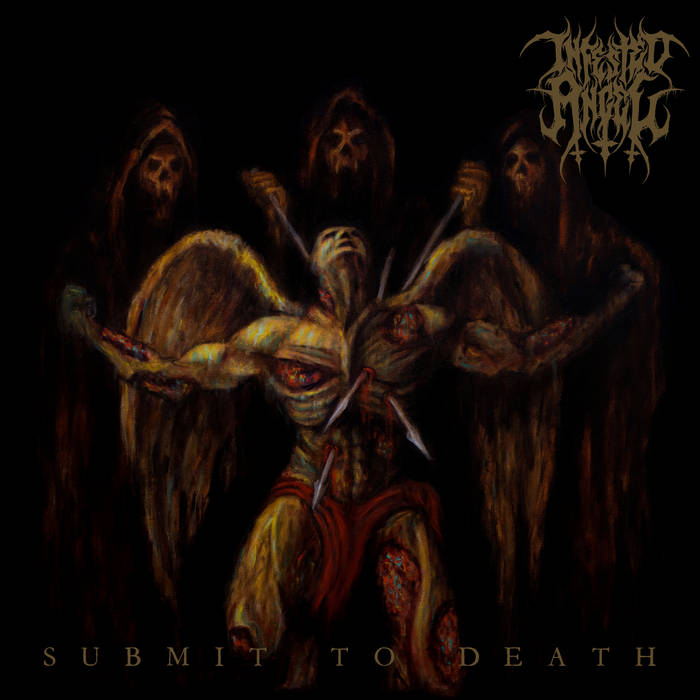 How does that old song go? What the world needs now, is filthy British Death Metal, sweet filthy British Death Metal. Well, I’m paraphrasing a little but you know what I’m on about. Following on from their debut EP ‘Nourish Me, Satan’, (A review of which you will have been able to read about two hours before this bad boy hit) Birmingham’s Infested Angel this year unleashed a wonderful follow up EP entitled ‘Submit to Death’. Like the first EP, this is self-released, but unlike the last one the band have seen fit to put this one out on cassette. Bravo chaps, bravo!

One of the most pleasing aspects to Infested Angel is that you will not find any modern sounding tones in any of their offerings. As with the debut EP this is all about crushing old school Death Metal and never is that more exemplified than during five main tracks of this release. (Not counting the intro/outro tracks which are more about mood setting and darkness casting in my view)

I won’t bore you all with the details of what lyrical concepts run through the EP as they are similar to the first EP and as such covered in my first review. For ‘Submit to Death’ I’ll instead tell you that Infested Angel have progressed in every single aspect since a year previous. Their song-writing has improved exponentially which is impressive as it was already of a high standard. Technically, the bands shred way more than ‘Nourish me, Satan’, and whilst the vicious aggressive riffs are an ever present, the band really do let themselves flow more the second time around with many a flourish of creativity woven throughout the release. Vocalist Andrew remains powerful, his growls thunderous and punishing, and the cavernous sound to the drums soars higher than before, crashing and rumbling along with heavy duty bass play throughout. Infested Angel could easily be the UK’s next big thing when it comes to Death Metal. Do not take your eyes and ears of these lads. (Luke Hayhurst)